Cerebrovascular accidents (CVA), commonly termed “stroke,” are one of the major causes of disability and death in adult humans. Not so long ago considered uncommon in dogs and cats, with the use of MRI as the current standard of care for evaluation of veterinary neurological patients, we now realize that “strokes” do occur and actually are fairly common. The next 10 years will be gathering and assimilating information on causes, clinical presentation, breed predispositions, treatments, outcomes, and advances in imaging techniques to aid in accurate identification. The literature to date is evolving as this disease process becomes more routinely recognized.

The central nervous system requires a constant supply of glucose and oxygen to sustain its high expenditure of energy. There are five pairs of arteries that supply the brain. The first three supply the cerebral hemispheres (rostral, middle and caudal cerebral arteries), while the cerebellum is supplied by the rostral and caudal cerebellar arteries. These arteries arise from the circle of Willis with species variation determining the source of blood supplying this arterial circle.

A stroke occurs when there is a loss of brain function due to a disturbance in the blood supply to the brain. This disturbance can occur either due to ischemia (reduced or lack of blood flow) or hemorrhage. Therefore, stroke is broken down into two categories:

The majority of strokes recognized in human and veterinary medicine are ischemic. They can be caused by either a local blockage of a blood vessel (thrombus) or a vascular obstruction transported to the brain from a distant site (thromboembolus). In humans, there are several classification systems depending on the vascular territory, the number of red blood cells that are found in the necrotic tissues dividing infarcts into pallid (pale) or hemorrhagic (red), the suspected underlying cause, and the size of the vessels involved. Disease processes involving large diameter blood vessels result in territorial infarcts, while diseases affecting smaller intraparenchymal penetrating arteries are responsible for lacunar infarcts. In humans, different disease processes are linked with different size vessel disease.

Some reported causes of ischemic stroke in veterinary medicine are shown in the table at right. In approximately 50% of animals with ischemic stroke, the cause is undetermined. This is referred to a cryptogenic ischemic stroke.

Infarcts consist of a central core of severely hypoperfused tissue that dies rapidly and a surrounding region of tissue that has a potential to recover. This region is known as the penumbra and is the target for therapeutic interventions. The penumbra can also evolve into a larger area of infarction.

Hemorrhagic stroke is caused by bleeding from blood vessels of the brain either directly into the brain parenchyma or into the subarachnoid space. When the bleeding is substantial enough, the results can be fatal. In humans, the source of primary intraparenchymal hemorrhage is not completely understood, but patients often have systemic hypertension with concurrent fibrinoid degeneration of the arteries in the brain. Hypertension in dogs can be primary or secondary to systemic disorders, such as renal disease and hyperadrenocorticism. Secondary causes of hemorrhagic stroke described in dogs include hemorrhagic infarction, vascular malformation, neoplasia, vasculitis, and coagulopathies.

At one point, CT scan was the imaging modality of choice to evaluate for acute hemorrhagic infarcts in humans. With advances in technology, MRI is now the gold standard in evaluating for ischemic or hemorrhagic stroke, as well as ruling out other possible causes of brain dysfunction, including neoplasia, trauma or inflammation. 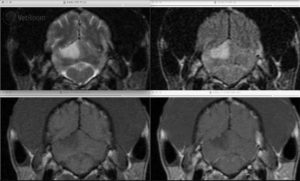 Fig. 1: Transverse MRI images of a cerebellar infarct in a Greyhound. There is a wedge-shaped lesion in the dorsal cerebellum that is hyperintense on T2-weighted (upper left) and FLAIR images (upper right), hypointense on pre-contrast T1-weighted images (lower left), and does not contrast enhance (lower right). Image courtesy of Dr. Mark Troxel, Massachusetts Veterinary Referral Hospital.

Ischemic strokes appear iso- to hypointense on T1-weighted images and hyperintense on T2-weighted and FLAIR sequences (fig. 1). Enhancement is not seen until reperfusion is noted 7-14 days following the stroke and at this time is faint and on the periphery of the lesion. Enhancement along with the lesion tends to resolve by 6-8 weeks post-injury.

More recent advances have included the use of diffusion-weighted imaging (DWI; fig. 2) and ADC mapping. Acute infarction results in water trapping within cells and causes reduced diffusion, which is seen as increased signal on the DWI. Some other lesions that are hyperintense on T2 will also be hyperintense on DWI, which is called “T2 shine through.” To differentiate this from true restricted diffusion from ischemic stroke, an ADC can be calculated. Areas with restricted diffusion will have low ADC values and will appear as a hypointensity on most ADC maps. Abnormalities on DWI can be seen within one hour of onset of ischemia with a reduction in ADC seen within 2.5 minutes. The classic appearance of acute infarction is hyperintensity of the DWI and hypointensity on the ADC. This pattern persists for the first 4 days and then the ADC will start to normalize from 4-10 days. The DWI can stay hyperintense for 72 days post-infarction.

In human MRI, perfusion weighted imaging (PWI) is used to identify regions of hypoperfusion (penumbra). In theory, this alerts the physician to cases that will benefit from thrombolytic treatment even beyond the typical therapeutic window.

Magnetic resonance angiography (MRA), commonly used in humans, is in the infancy stage in veterinary medicine. Understanding what we can achieve and see in the normal dog and cat will be required before we can accurately interpret abnormal scans.

Fig. 2: Transverse DWI and ADC map from a dog with a right cerebellar infarct. Note the hyperintense wedge-shaped lesion on the DWI (left) that is hypointense on the ADC map (right). Image courtesy of Dr. Mark Troxel, Massachusetts Veterinary Referral Hospital.

Although DWI and ACD mapping are now commonly used in veterinary medicine and have greatly improved the ability to identify acute ischemic infarcts, the size of our patients and limited experience makes PWI and MRA still an area of “maybe in the future.”

The MR image appearance of hemorrhage is dependent on the age of the bleed. As blood is broken down from oxyhemoglobin to deoxyhemoglobin, methemoglobin and then hemosiderin, each phase has different paramagnetic properties. The gradient-echo sequence is the most accurate of all of the MRI sequences and is more accurate than CT in predicting the presence and extent of hemorrhage. Hemorrhage, regardless of its age, will appear as a hypointensity on the GRE. Hypointensity on gradient echo is not specific for hemorrhage and can be seen with air, calcification, iron, melanin and foreign bodies. History and appearance of the lesion on other sequences will enable the reviewer to determine if the lesion is due to hemorrhage.

Once the diagnosis of stroke is made, an attempt to identify the underlying cause is initiated. Evaluation for hypertension (and its causes), endocrine disease (hyperadrenocorticism, hypothyroidism, hyperthyroidism, diabetes mellitus), kidney disease (protein-losing nephropathy), heart disease and metastatic disease is performed. If a hemorrhagic stroke was identified, an evaluation for hypertension (and its causes), a coagulopathy and metastatic disease should be performed. If a cause of stroke is identified, treatment is initiated.

In animals, the current recommendation is primarily around restoration and monitoring vital homeostatic functions and maintaining systemic blood pressure and normal ventilation to preserve the tissue in the ischemic penumbra. If blood pressure is consistently above 180 mmHg, antihypertensives are recommended; however, aggressive lowering should be avoided as hypertension can occur as a physiological response to a stroke to ensure adequate CPP in the penumbra of the infarct for up to 72 hours.

There is no evidence that glucocorticoid treatment provides neuroprotection in cases of stroke. Other neuroprotective agents such as NMDA antagonists, calcium channel blockers, sodium channel modulators, and hyperbaric oxygen therapy have not proven to be clinically helpful in human or animal stroke patients.

The most important aspect of treatment is to identify and treat the underlying cause if one can be determined. Serial neurologic examinations to identify signs of increased intracranial pressure. Supportive care should include maintenance of PaCO2 within normal range, not to exceed 40 mmHg, with intubation if needed.

Systemic blood pressure should be corrected and monitored to ensure cerebral perfusion pressure is maintained. Hypertonic saline (dog: 4-6 mL/kg; cat: 2-4 mL/kg; over 5-10 min) is preferred to achieve rapid restoration of blood volume and pressure while limiting the volume of fluid administered. As with ischemic stroke, hypertension should be treated if consistently > 180 mmHg.

Surgery to eliminate the space occupying mass if the hematoma is subarachnoid and the patient is deteriorating neurologically.

The prognosis for ischemic or hemorrhagic strokes depends on the initial severity of the neurological signs. Most cases of ischemic stroke will recover within weeks with supportive care. One study of a small number of dogs (33) report that dogs with concurrent medical conditions had a shorter survival time and were likely to suffer from subsequent infarcts than those dogs with no identifiable medical condition.

My Tweets
Limiting dependence on transfusion for the critically-ill patient

Synthetic colloids: A friend or foe?
Scroll to top