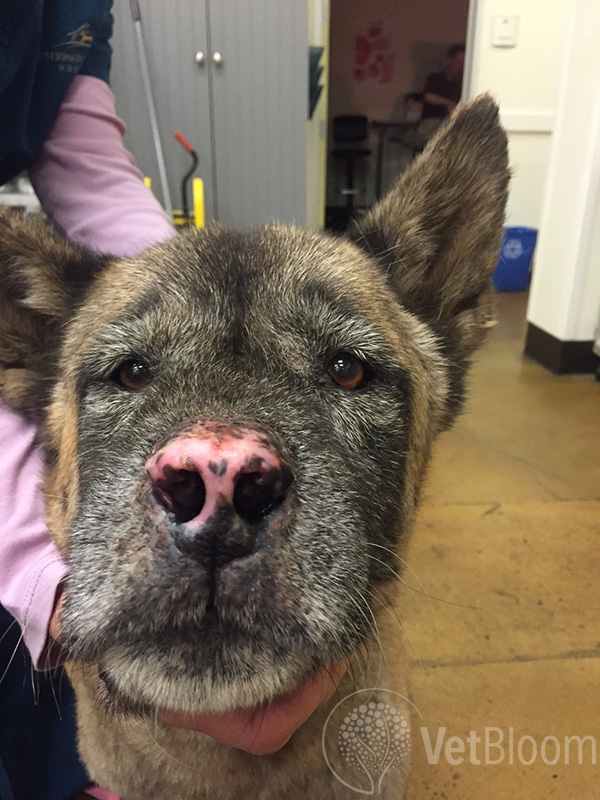 Fig. 1: An Akita with a flare up of PF, which is typically first noted by the owner when the nose becomes hypopigmented. Clinical signs improved with prednisone, azathioprine, and topical steroid.

Pemphigus foliaceus (PF) is one of the most common autoimmune skin diseases in the dog and cat. There is no sex or breed predilection, however Akitas (fig. 1) and Chow Chows are overrepresented, as well as some other canine breeds. There is no obvious age distribution; however, it does tend to occur more commonly in middle aged to older dogs, with some cases reported in puppies. Most cases are idiopathic in nature, although given the breed predisposition in dogs, a genetic link is likely. UV light can be a trigger factor, and may also exacerbate the disease in patients already diagnosed with PF. There is also an association with drug administration which can include both systemic and topical mediations. The two biggest culprits in our experience are sulfa based antibiotics as well as cephalosporins. Although much less common, paraneoplastic PF has been reported in the literature.

Many dermatologic lesions as well as the cytology from those lesions, can look very similar. Although it is not pathognomonic for PF, if acantholytic cells are observed on cytology, it should raise suspicion. These cells result from immune-mediated attack of the intercellular connections that hold the keratinocytes together in the stratum spinosum layer of the epidermis. Loss of this attachment results in rounded keratinocytes with an often centrally placed nucleus that resembles a fried egg. Acantholytic cells (fig. 2) as well as leukocytes (mainly neutrophils and sometimes eosinophils) accumulate to form superficial pustules under or within the stratum corneum. Common lesions noted with PF are pustules, papules, coalescing crusts, erosive dermatitis, and alopecia. Paws are often involved and pads may exhibit hyperkeratosis, adherent crusts, and or fissures. Nasal planum can be affected resulting in depigmentation, loss of cobblestone texture, erosive dermatitis, and adherent crusts. We don’t always observe intact papules or pustules, particularly in the cat. 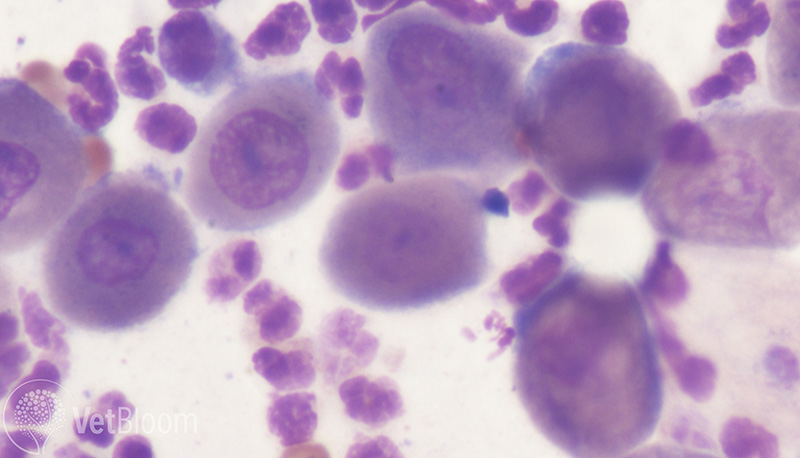 Fig. 2: Cytology obtained from an intact pustule demonstrating acantolytic cells in an Akita with histologically-confirmed PF.

Onset can be rapid depending on the underlying cause, however it can also be insidious, particularly in the cat where it is not uncommon for waxing and waning of lesions. Lesions on the face, head, and ears are often quite striking (fig. 3). Ears (particularly concave pinna) often develop proliferative crusts, with otitis externa usually, but not always absent. Periocular lesions and lesions along the bridge of the nose are common sites for PF in dogs and cats, and can sometimes be the only areas affected. While nail beds, concave pinna, and the area surrounding the nipples are common sites in the cat. PF may be pruritic, particularly if concurrent secondary infections are present. Mucosal and mucocutaneous lesions are less common to rare. More severely affected patients will often present with lethargy, lymphadenopathy, pyrexia, and anorexia.

Fig. 3: A 10-year-old FS English Bulldog that likely developed PF secondary to cephalexin, but it is not certain because she was started on Atopica and prednisone prior to referral. This picture was taken a few weeks after treatment was started and was already an improvement. 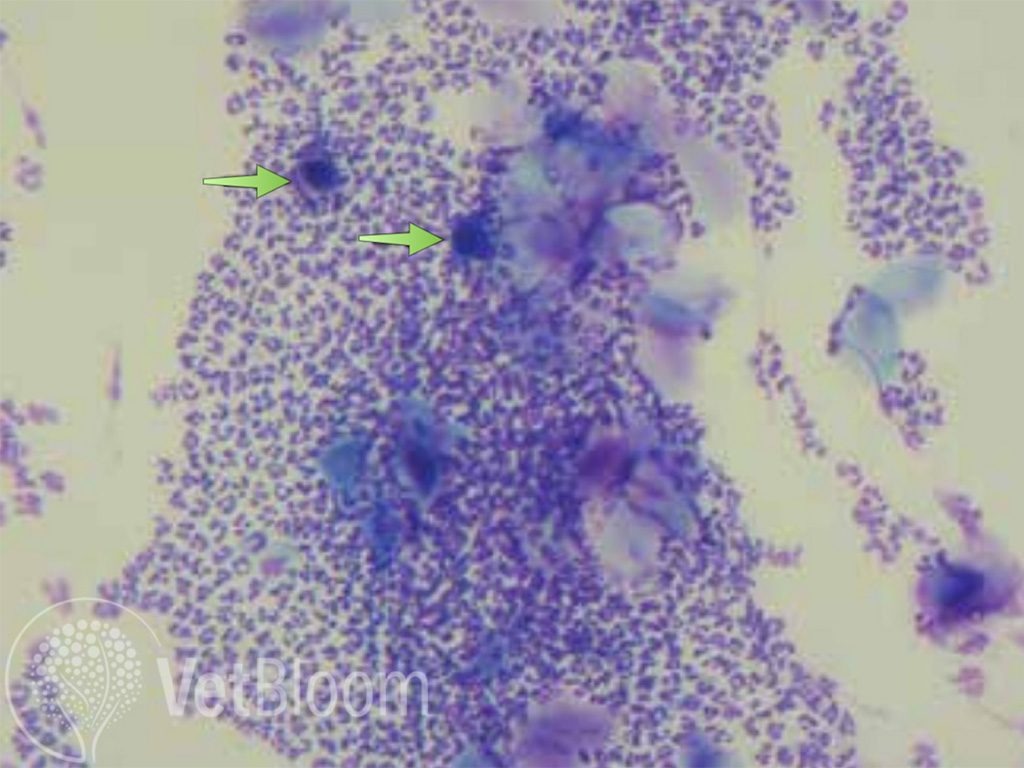 Acantholytic cells on cytology (ideally from an intact pustule), as well as absence of bacteria or infectious organisms should raise suspicion. If crusts are only present, it is beneficial to remove the overlying crust and perform a direct impression on the active area under the crust. When PF is suspected, 10x magnification should be used to scan the slide to look for abnormal cells (fig. 4). Once areas of concern are observed, higher magnification can be used, it is also important to use oil immersion to help identify the presence of bacteria. Confirmation with biopsy is relatively straightforward (ideally sent to a dermatopathologist). The punch should be centered over the lesion in question (i.e. pustule). There is no indication, to obtain a normal/abnormal skin sample. If intact pustules are not available, biopsy of skin with the overlying crust can be very beneficial and is oftentimes diagnostic. It is helpful to include crusts with the skin samples. Cytology should be used to help select areas. It is recommended to include as many samples as possible, usually 6 punches for most dermatopathologists. It is important NOT to surgically prep these areas as we do not want to scrub away the evidence. If there is concern of infection after the biopsy, the biopsy site can be flushed with the antiseptic of your choice. If the patient is not severely affected, and bacteria are observed, aerobic culture/susceptibility as well as clearing the infection prior to biopsy may be indicated. Stay tuned for part two; tips on differentiating PF from other disease based on lesion distribution and treatment.

Ideally, treatment is not instituted unless dermatohistopathology is consistent with pemphigus foliaceus (PF). It is best to wait for the results prior to starting treatment, unless the patient is severely affected. Immune suppressive medication prior to the biopsy can make histologic interpretation more challenging, and sometimes a definitive diagnosis cannot be achieved. If there is a potential adverse reaction to a particular drug (topical or oral), the offending medication should be discontinued. It is recommended that the inciting drug not be administered again. Medication reactions can be a one-off event and may never occur again, though sometimes the opposite holds true. It is not recommended to re-challenge the patient. There may be cross reactivity between medications in certain classes, and this holds true particularly in regard to antibiotics (i.e. cephalosporins and penicillins).

If bacteria or yeast are observed on cytology, it is of the utmost importance to treat the underlying infection, ideally prior to biopsy in case the PF was triggered by infection. If concurrent dermatophyte infection is suspected, a DTM culture is indicated. When the PF is likely associated with a drug reaction to an antibiotic, a culture should be performed if bacteria are still present to ensure the correct alternate antibiotic is chosen. Typically, all PF cases need to be treated with some sort of immune suppressive medication early on in the disease process. Length of treatment depends on whether the inciting cause for the disease can be determined. For patients whose PF is the probable result of a medication, the duration of treatment is dependent on whether the PF was drug-triggered or drug-induced. The induced patients are treated by discontinuing the offending medication and also immune suppressive medication, particularly during induction of treatment. These patients can usually be tapered off the medication as long as clinical signs do not recur. It is speculated that the drug-triggered PF is a latent disease that is brought out by drug administration. This type tends to persist and requires treatment even after the inciting drug is discontinued.

An appropriate balanced diet is important for skin support; the dermatologic therapeutic diets are good choices. The addition of essential fatty acid supplements may also be beneficial. Initial treatment varies based on experience and familiarity with medication options. When the patient’s lesions are not severe, doxycycline and niacinamide (not to be confused with niacin) are reasonable first choices (fig. 5). These drugs have immunomodulatory effects and work synergistically to decrease neutrophil chemotaxis. In general, glucocorticoids are often indicated due to their rapid onset. Prednisolone is preferred over prednisone in cats. If there is a poor response, the dose may need to be increased, or a different type of glucocorticoid may be indicated. In some cases, glucocorticoids alone are sufficient. However, I will typically also start prednisolone and an additional medication such as Atopica® (cyclosporine) concurrently due to the lag phase for Atopica®. Some clinicians prefer azathioprine, which also has a lag phase. Azathioprine should not be administered in cats, as they are very susceptible to toxicity (severe myelosuppression). Some reports suggest success with using chlorambucil in cats.

The goal in managing any PF patient is to begin a progressive taper of the glucocorticoid once clinical improvement is noted in an attempt to avoid the side effects of chronic steroid usage. For patients with a very severe initial presentation, medications should be tapered more slowly. Ultimately, the glucocorticoid frequency is decreased to alternate day therapy, or ideally discontinued altogether. If the patient continues to do well once the glucocorticoid is discontinued, tapering and eventually discontinuing other immune suppressive medication may be indicated. If at any time clinical signs recur, the immunosuppressive medication(s) should be increased to the previous dose that was controlling lesion recurrence. If a patient responds well and medications are discontinued, it is important to maintain communication with the owner and to direct observation of clinical signs that should be monitored to identify recrudescence early. Some patients require life-long therapy; however, a majority of the time the dosing frequency can be significantly altered and decreased. In any patient on long term immunomodulatory therapy, monitoring hematology and serum biochemistry is recommended at least every 6-12 months, depending on the drug used, the patient’s age, and underlying conditions. It is also beneficial to obtain baseline blood work, and to always monitor for infections.

Fig. 5: A Golden Retriever that was diagnosed with PF (A) by the RDVM and started on prednisone. The dog gained a significant amount of weight and was severely PU/PD. The owner had financial constraints and could not add in steroid-sparing agents like cyclosporine so she was started on a doxycycline and niacinamide combo. She responded well and was improving by one month (B). The dog had been doing well and completely healed until the owner went away and she found a bunch of meds that were spit out and not given (C).