The information provided in this article is not intended to replace consultation with an animal poison control center, but rather to provide awareness of these newer toxicities, their common clinical signs and basic treatment recommendations. An update on toxicology treatments is also provided.

Many veterinarians are made aware of a toxin exposure concerns by a phone call from a worried owner. Obtaining an accurate history, including the name of the ingested substance, time of ingestion and amount of substance ingested is important in determining the appropriate initial treatment recommendations. If indicated, advising early, at home gastrointestinal decontamination is important in altering the clinical path of many incidents of toxin ingestion. Emesis is often indicated if the patient is asymptomatic and time of ingestion is believed to be less than an hour prior. It may also be attempted in an asymptomatic patient with an unknown time of ingestion. Emesis is avoided in the case of corrosive agents, hydrocarbon toxins (gasoline), symptomatic patients, or patients with any underlying condition which may predispose to aspiration, such as laryngeal paralysis, megaesophagus or decreased mentation. At-home emesis can be induced in dogs with hydrogen peroxide, 1-5 ml/kg without exceeding 50 ml/ dog. At this time there are no safe emetic agents that can be administered at home to cats. Cats ingesting toxic agents that require emesis should be referred to a veterinarian. Ocular and dermal decontamination may also be recommended if topical exposure is a concern.

Although few toxins have antidotes, referral to a 24-hour facility is often recommended for administration of activated charcoal, further monitoring and supportive care. Upon referral, owners should be instructed to bring the original package or container of the ingested substance to allow further veriﬁcation of the ingested substance and quantity.

Xylitol is a sugar alcohol used as a sweetener in many sugar-free products, including gum, candy, baked goods and toothpaste. Xylitol can induce pancreatic insulin release in most non-primate species resulting in moderate to severe hypoglycemia. Toxicosis can occur within 15-30 minutes of ingestion. Doses greater than 0.1 g/kg can induce hypoglycemia and doses greater than 0.5 g/kg can result in acute hepatic necrosis.

The main reported exposure to dogs is the ingestion of chewing gum. There is no standard xylitol content in sugar-less gum. The ingested dose can be calculated by estimating the number of pieces ingested and amount of xylitol per piece. Initial signs of toxicosis are usually associated with hypoglycemia and include vomiting, lethargy and loss of coordination. Signs can progress to recumbency and seizures. Elevated liver enzymes and liver failure can be seen within a few days, and are usually accompanied by melena, icterus, anorexia, vomiting and diarrhea. After known exposure, emesis should be induced in an asymptomatic patient. Activated charcoal is not recommended as it does not bind xylitol.

Hypoglycemic patients require IV ﬂuids with dextrose supplementation and frequent blood glucose monitoring to maintain euglycemia. Asymptomatic patients should be admitted for glucose monitoring. Hepatoprotectants, such as Denosyl or SAMe, can be administered and liver enzyme monitoring should be performed on presentation and 48-72 hours post ingestion. If liver failure occurs, aggressive supportive care is required, but prognosis is guarded.

Grapes and raisins are associated with the development of acute renal failure in dogs. The mechanism of action of this toxin is unknown, as is the toxic dose. As there is no documented toxic dose, all exposure to grapes and raisins should be avoided and all ingestion should be treated aggressively. Immediate decontamination with emesis is recommended. Grapes and raisins experience delayed gastric transport and delayed emesis should still be attempted. A dose of activated charcoal is recommended to possibly bind the unknown toxic agent. IV ﬂuid diuresis and monitoring of renal values is recommended for 24-48 hours in asymptomatic patients. Renal values should also be evaluated 48-72 hours post exposure. Up to 50% of dogs ingesting grapes or raisins may have no clinical signs. Patients developing renal failure as a result of grapes or raisin ingestion may have a guarded prognosis.

Bromethalin is a rodenticide that causes uncoupling of oxidative phosphorylation in the cells of the central nervous system. This results in dysfunction of the sodium/ potassium ATPase pumps that leads to cellular swelling and cerebral edema. Clinical signs include depressed mentation, ataxia, tremors and seizures. Cats are more sensitive than dogs to this toxicity. There is no antidote and treatment is focused on decontamination. Emesis is recommended as well as repeated doses of activated charcoal as bromethalin undergoes enterohepatic recirculation. In symptomatic patients, treatment consists of supportive care, IV ﬂuids and mannitol for reduction of cerebral edema. Treatment of patients with neurological signs is often unsuccessful.

Cholecalciferol rodenticide (Vitamin D3) toxicity induces hypercalcemia and hyperphosphatemia that can be fatal. These changes result in dystrophic mineralization of the kidneys and acute renal failure. The heart, lungs, gastrointestinal and CNS systems are also affected. Clinical signs present in the ﬁrst 12-24 hours and include non-speciﬁc symptoms such as vomiting, anorexia and lethargy. Polyuria and polydipsia develop over the ﬁrst 24 hours, followed by acute renal failure within 48-72 hours. Acute treatment includes emesis and the administration of multiple doses of activated charcoal. Additional treatments, such as IV saline diuresis, furosemide and prednisone, are used to increase renal clearance of serum calcium and phosphorus.

In addition to cholecalciferol rodenticides, Vitamin D toxicity can result from ingestion of human medications containing calcipotriene which is a vitamin D analog used in psoriasis treatments.

A signiﬁcant majority of calls to pet poison lines are in relation to questions about the ingestion of human drugs. Two of the most commonly ingested medications are sleep aids and antidepressants.

Antidepressant medications are a diverse class of drugs that include selective serotonin reuptake inhibitors (SSRI), selective norepinephrine reuptake inhibitors (SNRI), tricyclic antidepressants and MAO inhibitors. These drugs are found in many homes and are dispensed for both veterinary and human use. SSRIs and SNRIs are the two most common toxicities in this category. They cause similar clinical signs and are treated the same. SSRIs block the reuptake of serotonin at the pre synapse. Increased serotonin levels can result in clinical signs of depression or CNS excitement, vomiting, diarrhea, tremoring and seizures. These medications have a broad range of toxicity depending on the drug and species, with cats generally being more sensitive. Treatment includes decontamination if asymptomatic, activated charcoal administration, IV ﬂuid support, and hospitalization for monitoring and treatment of heart rate, rhythm and blood pressure abnormalities.

Sleep aids are commonly found in many homes in America, but are not commonly used in veterinary medicine. Most prescription sleep aids are now of the non-benzodiazepine class. These medications function at the GABA chloride channels in the central nervous system. GABA transmission is potentiated and there is increased frequency of chloride channel opening. This results in inhibition of neuronal excitation. Although sedation and depression can be seen with this toxicity, almost 50% of pets will present with signs of paradoxical CNS excitement and seizures, as well as vomiting and diarrhea. Treatment includes decontamination and activated charcoal administration. Patients arehospitalized for IV ﬂuid diuresis and may require administration of sedatives or anxiolytics. Benzodiazepines should be avoided due to concern for possible enhancement of signs. In cases of severe depression, ﬂumazenil can be administered intravenously for attempted reversal. If severe respiratory depression occurs, mechanical ventilation may be required. 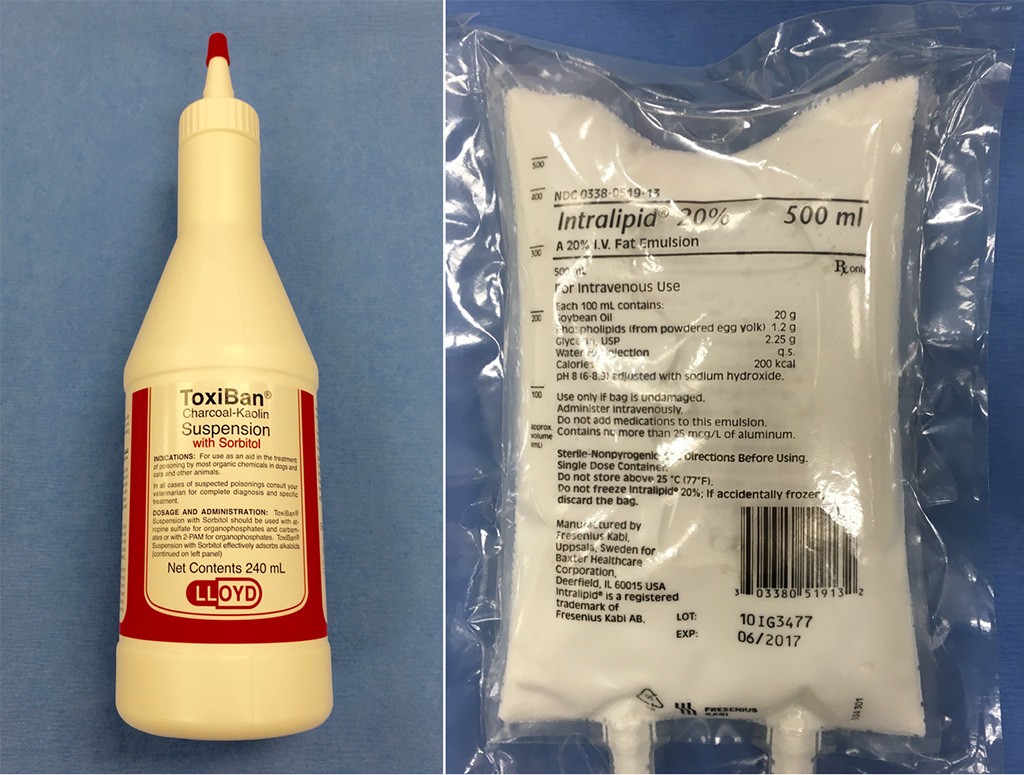 Activated charcoal (left) is administered to bind toxins that remain in the GI tract, while intravenous lipid emulsion (right) is a new treatment for fat-soluble drug toxicities.

Activated charcoal (Fig 1) is administered to bind toxins that remain in the gastrointestinal tract. It is not indicated in the case of toxicities where it is known to not bind the active toxic ingredient, such as xylitol and ethylene glycol. It is not indicated in cases where the pet is symptomatic and at risk for vomiting and/or aspirating the activated charcoal. An initial dose of charcoal (3-5 g/kg) containing a cathartic is recommended even as far out as 6 hours from the ingestion of a toxin that undergoes enterohepatic recirculation or has a delayed release formula. If multi doses (1-2 g/kg, q 6-8 hours) of activated charcoal are recommended, additional doses should not contain a cathartic, such as sorbitol, due to the risk of hypernatremia from free water loss into the gastrointestinal tract. Serum sodium levels should be monitored in patients receiving multiple doses of activated charcoal, especially if also suffering ﬂuid losses from vomiting or diarrhea.

Intravenous lipid emulsion (ILE) is a new treatment for fat-soluble drug toxicities in humans and animals. In veterinary medicine it has been documented in the treatment of toxicities associated with local anesthetics such as lidocaine, tricyclic antidepressants, muscle relaxants such as Baclofen and ivermectin. ILE works as a lipid sink and sequesters lipophilic compounds into this intravascular space, therefore decreasing the amount of free toxin in the system. Various treatment regimens exist and commonly consist of an initial bolus dose followed by a constant rate infusion. Doses may need to be repeated if clinical signs persist or worsen.

High dose insulin therapy has been used for the treatment of beta-blocker toxicity. The administration of regular insulin as a constant rate infusion aids in blocking the bradycardia, hypotension and cardiovascular collapseseen with this toxicity. Dextrose is concurrently administered to prevent iatrogenic hypoglycemia. The exact mechanism of action is unknown, but insulin has been found to increase cardiac inotropy, resulting in increased perfusion due to increased cardiac output. Insulin also aids in promoting aerobic metabolism by the myocardium and the use of carbohydrates for energy.

Dialysis can be used to eliminate toxins and toxic metabolites from the blood, especially in cases where the patient is already symptomatic from the toxicity and has been unresponsive to initial therapy of decontamination, basic supportive care and antidotes if indicated. Ideally dialysis would be used to eliminate toxins from the body prior to their causing damage or being converted to more toxic metabolites. Dialysis can also be used to support the body if the consequence of the toxicity includes renal failure, acid-base alterations, electrolyte disturbances or ﬂuid overload. Toxins with low molecular weights (<1,500 D), small volumes of distribution, and minimal protein binding are the best candidates for dialysis. The most common veterinary toxin treated with hemodialysis is ethylene glycol, as the toxic metabolites are able to be dialyzed, while the body is supported due to the acute renal failure, metabolic acidosis and electrolyte disturbances associated with this toxicity. Other toxins that are treated with dialysis include salicylates, phenobarbital, acetaminophen, aminoglycosides and several human drug toxicities such as tricyclic antidepressants.