One of the most common causes of spinal cord injury in dogs is intervertebral disc herniation (IVDH). Spinal cord injury in these cases results from a combination of compression and contusion. Surgical decompression effectively relieves one component of the injury, but medical management of the contusive injury remains an issue. While the compression causes primary mechanical damage, it also precipitates a cascade of secondary biochemical events that result in the progressive expansion of tissue damage hours after the injury. Free radical formation and excitotoxicity are major contributors to this damage.

Many experimental drug therapies targeting this cascade of secondary injury have improved outcome in experimental models, but only a few have shown significant clinical benefit. Methylprednisolone sodium succinate (MPSS) is known to prevent lipid peroxidation and decrease free radical production which would help alleviate the secondary injury. It was evaluated in a series of clinical trials in people (the National Acute Spinal Cord Injury Studies NASCIS trials) and produced a small benefit if treatment was initiated within 8 hours of injury. While initially promising, the results of these trials were controversial, and MPSS has not been adopted as a standard of care in human medicine. Polyethyelene glycol (PEG) has also been touted for its ability to fuse cell membranes and has improved outcome in experimental models of spinal cord injury. PEG has been evaluated in a clinical trial in dogs with the most severe grade of injury (paralysis with absent pain perception) caused by IVDH. The outcome of dogs in this study was favorable when compared with historical controls, but was no different than outcomes reported with surgery alone in other retrospective studies. The use of MPSS and PEG in veterinary medicine for spinal cord injury is quite common and a variety of dosing protocols exist. Unfortunately, there are markedly different opinions on when to give these drugs. Many neurologists and neurosurgeons including the neurology/neurosurgery department at our hospital do not use these drugs for acute spinal cord injury secondary to IVDH. The main reason for reluctance to use them is that neither treatment has ever been tested in placebo‐controlled, randomized, blinded trials in dogs, so it is unclear how effective or safe the treatments are. 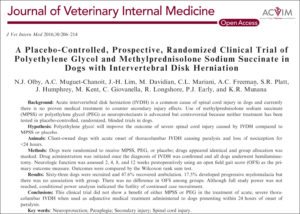 Recently, a multicenter clinical trial headed by Dr. Natasha Olby of the North Carolina State University College of Veterinary Medicine was conducted to try to determine if these drugs were of any benefit. Their hypothesis was that polyethylene glycol (PEG) but not MPSS would improve the outcome of dogs with acute thoracolumbar intervertebral disk herniation (TL‐IVDH) resulting in severe spinal cord injury. The aim of this placebo‐controlled, randomized, blinded clinical trial was to evaluate the safety and efficacy of PEG and MPSS when used in addition to decompressive surgery. The dogs selected were client-owned animals with an acute onset of TL-IVDH causing paralysis and loss of pain perception for less than 24 hours. Dogs with acute TL‐IVDH causing paraparesis or paraplegia with intact pain perception were not selected because of the rapid and high recovery rate in these cases with decompressive surgery alone. Dogs were randomized to receive MPSS, PEG, or placebo; the drugs appeared identical and the clinicians were blinded as to which drug they were giving. Once the diagnosis of IVDH was confirmed with either CT, MRI, myelography or CT myelography, drug administration was started and all dogs underwent decompressive hemilaminectomy. Neurological function was assessed 2, 4, 8, and 12 weeks postoperatively using an open field gait score (OFS) as the primary outcome measure and the outcomes were statistically compared. Sixty‐three dogs met the inclusion criteria and 47.6% recovered ambulation. Eleven of the 63 dogs (17.5%) developed progressive myelomalacia and were euthanized, but there was no correlation with any treatment group. There was also no difference in OFS among groups. Although the full study power (number of cases) was not reached, a conditional power analyses between the groups showed that further data collection would be unlikely to change the results. None of the treatment groups developed any significant medication associated adverse effects and were well tolerated. This clinical trial showed that there was no benefit to using either MPSS or PEG for the treatment of acute, severe spinal cord injury secondary to thoracolumbar IVDH in dogs presenting within 24 hours of onset of paralysis.

This study is important because to date it is the best designed clinically-relevant study to show that there is no benefit to using MPSS or PEG in the treatment of acutely down back dogs.

My Tweets
Making the most of your ultrasound machine