For most species, laboratory hematologic evaluation (i.e., the hemogram) consists of an automated complete blood count (CBC), spun microhematocrit, and microscopic examination of a blood smear. Microscopic examination of a blood smear is an essential part of the hemogram as it can provide vital diagnostic information that is not provided by automated hematology analyzers. The morphology, distribution, and quantity of all three cell lines (RBCs, white blood cells (WBCs), and platelets) should be evaluated. RBC morphology is the focus of this session. 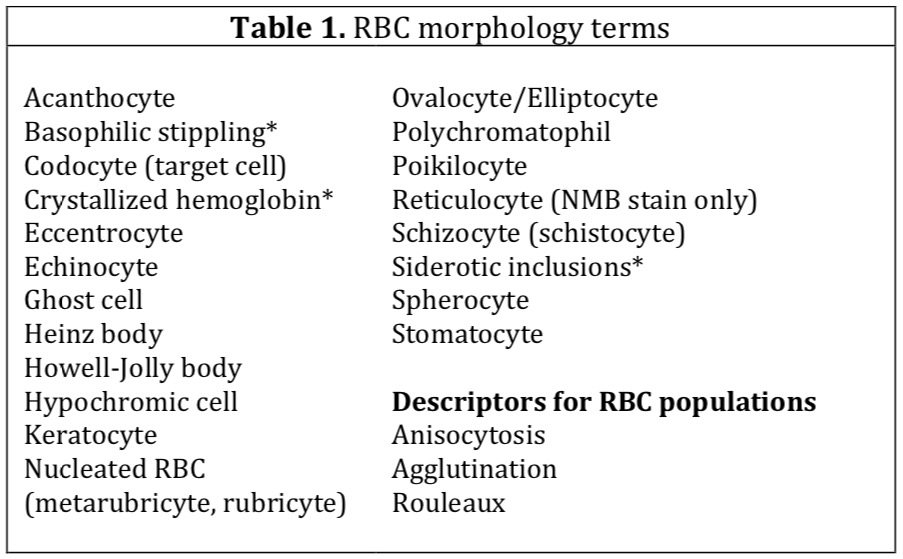 A survey done by Newman et al.1 examined agreement between clinical pathologists and clinicians regarding RBC morphology terms and their clinical value. The results pointed to important shortcomings in how these two groups communicate caused by discordant understanding of certain RBC morphology terms and, possibly, suboptimal reporting practices. Most of the RBC morphologic terms used by clinical pathologists are presented in Table 1. Images of the changes and comprehensive explanations of their clinical significance are available in various hematology texts2,3 and many of them will be explored in this session. As a note, the term poikilocyte refers to any abnormally shaped RBC. Poikilocytes refer to RBCs with specific morphologies (e.g., acanthocytes, spherocytes) as well as abnormally shaped RBCs that do not fit into a specific category.

Consistent reporting of blood smear findings is important for laboratory-clinician communication and monitoring of disease over time. Findings should be expressed as clearly and objectively as possible. Most laboratories use a classification scheme to standardize blood smear findings. At Ethos Labs, the following semiquantitative reporting scheme is used: 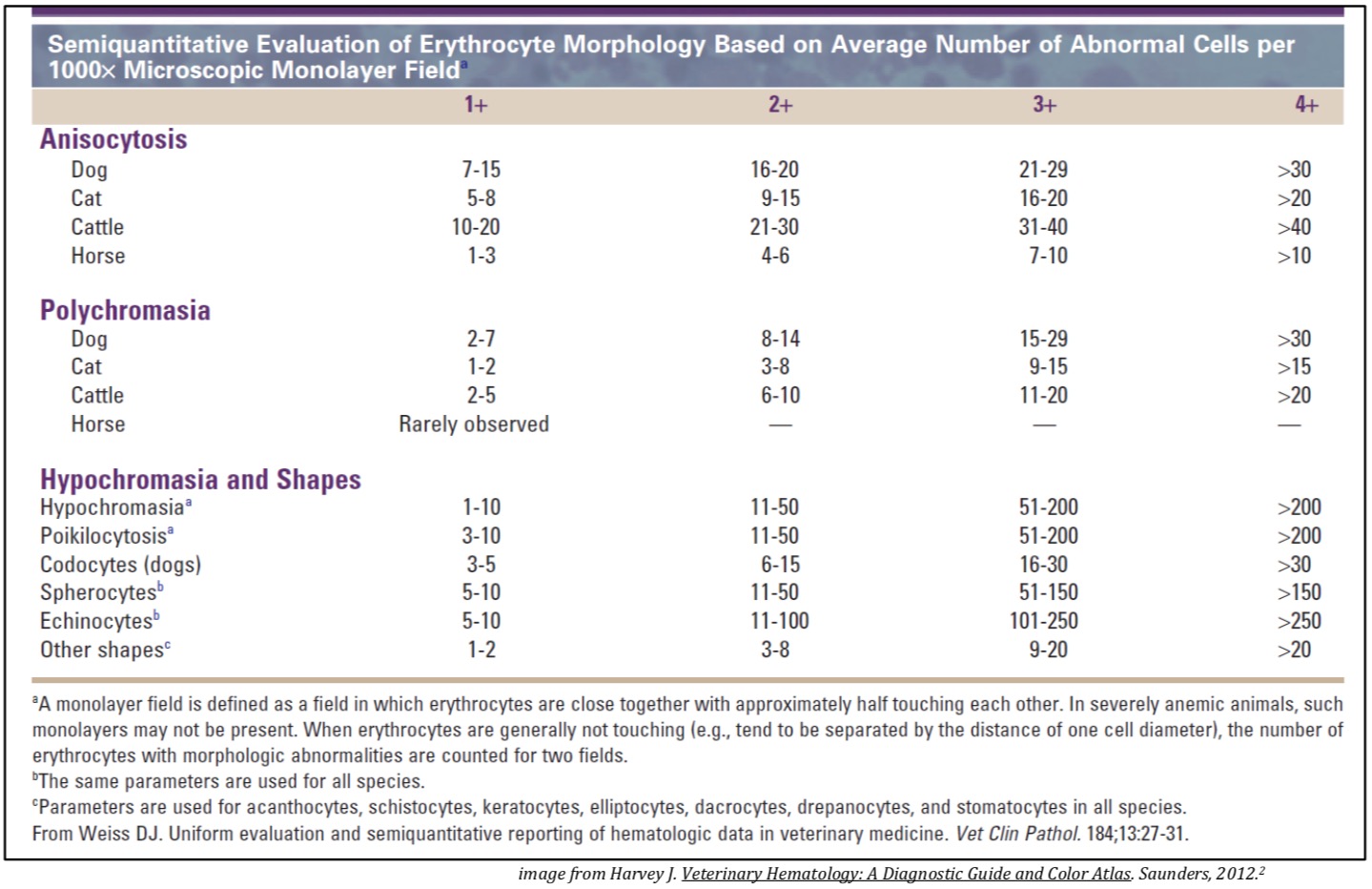 Although some morphologic changes are of limited clinical utility, some provide important diagnostic information. Frequently used and/or clinically significant RBC morphologies are presented in Table 2. 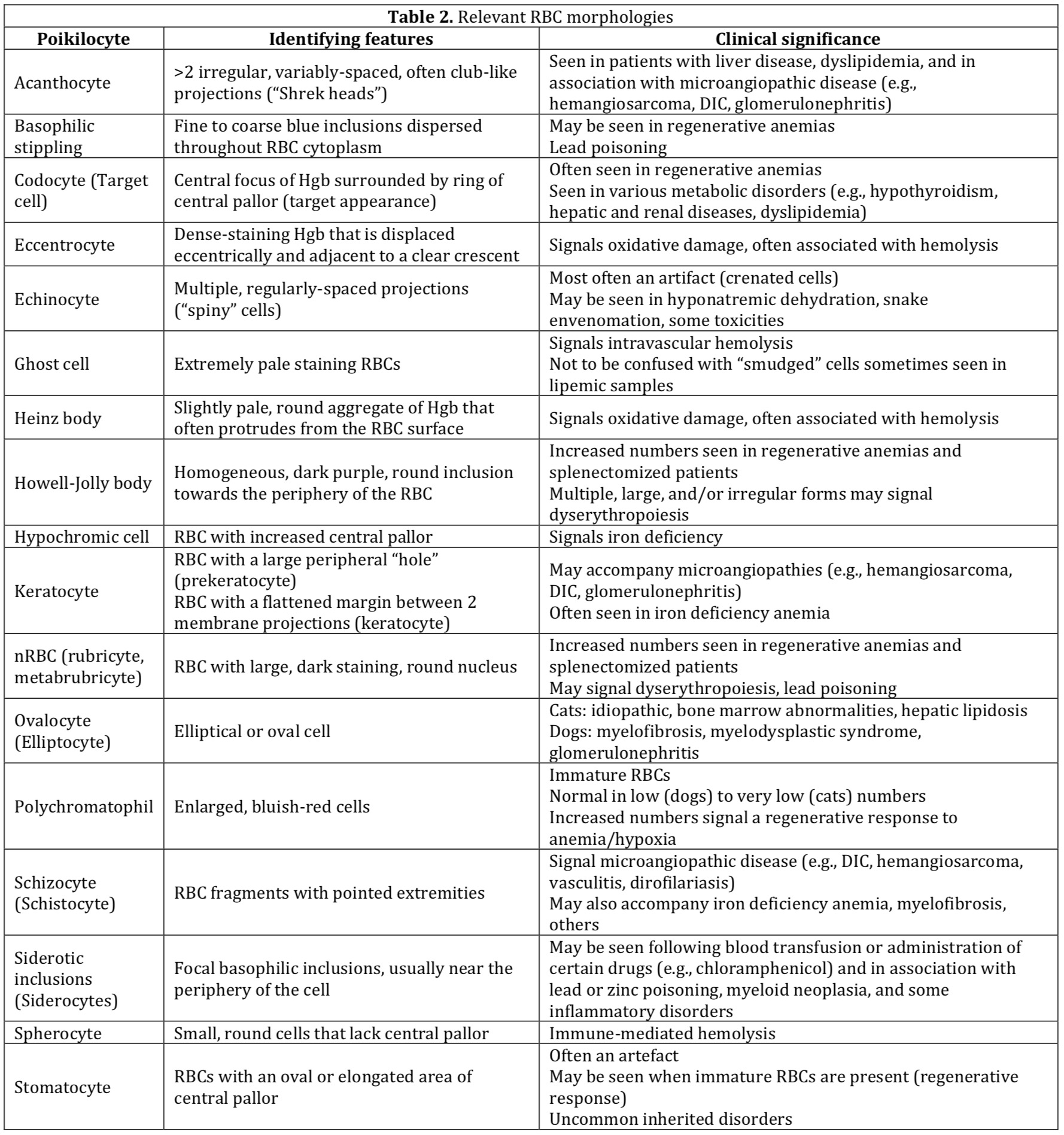 Selected profiles of morphologic changes and their clinical significance are presented here:

Microscopic examination of a blood smear is a crucial part of the hemogram. Recognizing individual RBC morphologic abnormalities and patterns of abnormalities may facilitate the diagnostic process. Furthermore, healthy communication between clinicians and laboratory personnel is important, as understanding the what, when, and why of reporting RBC abnormalities will lead to a more complete understanding of the hematologic state of the patient.