Marijuana is the most commonly used illicit drug in the United States and with the growing number of states allowing its use medicinally and recreationally, there is bound to be an impact on veterinary medicine.  There is growing evidence that marijuana has medicinal value, but, like all drugs, it has detrimental effects as well.  Marijuana can be found in many different forms, and this has implications for the presentation and severity of the intoxications seen in animals.  Over the past few years, the use and prevalence of cannabinoid-containing products have increased.

Commonly known as the hemp family, the Cannabacea is made up of two genera of economic importance.  Humulus is the source of hops used in brewing beer.  Cannabis, of which Cannabis sativa is the main species, is one of the world’s oldest cultivated plants.  C. sativa contains more than 400 compounds, of which more than 60 are cannabinoids.  The most abundant and pharmacologically active of the cannabinoids is Δ-9-tetrahydrocannabinol (THC or Δ-9-THC). Δ-9-THC is a volatile oil with high lipid solubility and readily binds to glass and plastic.  Other cannabinoids found in C. sativa are Δ-8-THC, cannabigerol (CBG), and cannabidiol (CBD), which, unlike THC, are minimally psychoactive.

Studies have found increased rates of unintentional pediatric exposures in states that had passed marijuana legislation.  Over the past five years, the Pet Poison Helpline has seen a 330% increase in the number of cases of marijuana ingestions in pets.

Although the greater availability and possibility of exposure may be one of the main factors in the increase in cases, changes in the product itself may be responsible for the increased severity of clinical signs and thus the need for medical treatment.  The majority of unintentional marijuana exposures in young children were from medical marijuana, often in the form of an edible.  Given their palatability and higher THC concentrations, edibles may increase the likelihood of ingestion and cause more severe clinical signs.

THC content in marijuana varies considerably, depending upon both the cultivation techniques (amount of light, moisture, soil type, soil pH, nutrients, and fertilizers) and how it is taken.  Hashish can be around 6-10% THC, and hash oil around 20-60% THC.  A typical marijuana cigarette generally contains 15-30 mg of THC.  Edible products can contain very high amounts of THC (100-500mg).  These products can be made with THC butter, produced by boiling the plant to extract the THC.  Butter is added to absorb the THC and the plant material is then strained out.

Mechanism of toxicity and effects

There are two main receptors, Cannabinoid Receptors 1 and 2 (CB1 and CB2).  CB1 is the receptor at which THC acts, and is responsible for its psychoactive effects.  This G-protein coupled receptor is found in both the CNS and in multiple locations throughout the body.  Activation of receptors in certain areas, such as the cerebellum and basal ganglia, results in the clinical signs of incoordination.  THC’s action in the hypothalamus is manifested in people as “the munchies”, caused by stimulation of the region that controls food intake.  CB1 receptors have also been discovered in the spleen, skin, adrenals, pancreas, heart, lungs, and parts of the urogenital and GI tracts.  CB2 receptors are found mainly in the spleen and immune cells and are thought to have a role in immune suppression.

Although an uncommon route of exposure, veterinary patients may be exposed to second-hand cannabis smoke.  Inhaled THC is reported to have a bronchodilatory effect, but this effect is ephemeral and very mild.  Cannabis smoke can potentially be irritating to conjunctival, nasopharyngeal, and bronchial tissues leading to conjunctival injection and sinusitis.

Acutely, low to moderate THC doses cause an increase in heart rate (which can be as high as 50%).  High doses have been reported to cause bradycardia.

The absorption of cannabinoids is dependent on the route of exposure.  Inhalation results in rapid absorption via the lungs, and Δ-9-THC can be detected within seconds in plasma.  Peak plasma concentrations occur within a few minutes and signs rarely persist beyond a few hours.

Ingestion results in a more delayed and erratic absorption.  In the blood, almost 90% of THC is found in plasma and bound to plasma proteins.  Hepatic metabolism is mainly via cytochrome P-450 isoenzymes.  More than half of cannabis is excreted via feces and about 20% via urine.

As THC quickly enters highly vascularized tissues such as the liver, heart, lung, spleen, muscle, and fat, a dramatic decrease in plasma concentration is seen.  After ingestion, psychotropic effects are noted within 30-90 minutes and peak effects are seen within 2-4 hours.  The highly lipophilic nature of THC allows it to accumulate in adipose tissue and it is slowly redistributed from fat stores back into the bloodstream.  In dogs, it takes roughly 5 days for 80-90% of THC to be excreted from the body.

In spite of the development of moderate clinical signs at low doses, the overall toxicity of the cannabinoids is low.  Signs have been reported with exposures as low as 85 mg/kg.  Experimentally, death was seen in rats at 1 g/kg orally, but lethality was not observed in beagles or rhesus monkeys at 3-9 g/kg.  One source cites the oral LD50 in dogs as 3 g/kg and cats 200 mg/kg.  The utility of determining the exposure dose is of questionable clinical value as toxic and lethal doses are not well established.

The classic presentation of a dog that has been exposed to marijuana usually involves some combination of ataxia, urinary incontinence, and disorientation.  In a study of 213 dogs with presumed or confirmed THC exposure, 99% presented showing neurologic signs.  These included depression, ataxia, tremors, seizures, mydriasis, glassy eyes, disorientation, hyperesthesia, hyperactivity, head bobbing, recumbency, and stupor.  Fly-snatching has been reported in cats.  The CNS effects may be explained by both activity at CB receptors and the fact that THC affects a variety of neurotransmitters.  THC increases the activity of GABA, which results in increased inhibition in the brain leading to CNS depression.  CNS signs are usually of short duration and typically last 4-6 hours.  Recovery times in general can be up to 5 days depending on the exposure dose.

Although THC has antiemetic properties, it can cause vomiting.  This may be due to irritant effects of the plant material on the gastric mucosa, or if another substance known to cause vomiting was also consumed (e.g. chocolate).  Combined marijuana and chocolate toxicity occurred in 21% of dogs exposed to marijuana in a study by Meola et al.  This study also found 47% of dogs presented with urinary incontinence, which is much higher than previously reported and not an effect seen in humans.  This may be due to an additional urinary THC metabolite uniquely produced in dogs.  Other clinical signs that have been reported in dogs: hypersalivation, tachy- or bradycardia, and hypo- or hyperthermia.

There is a multitude of other toxins known to cause CNS depression, and these must be considered as differential diagnoses.  These include: ethanol, ethylene glycol, ivermectin, opioids, barbiturates, benzodiazepines, phenothiazines, amphetamines, antihistamines, and tricyclic antidepressants. 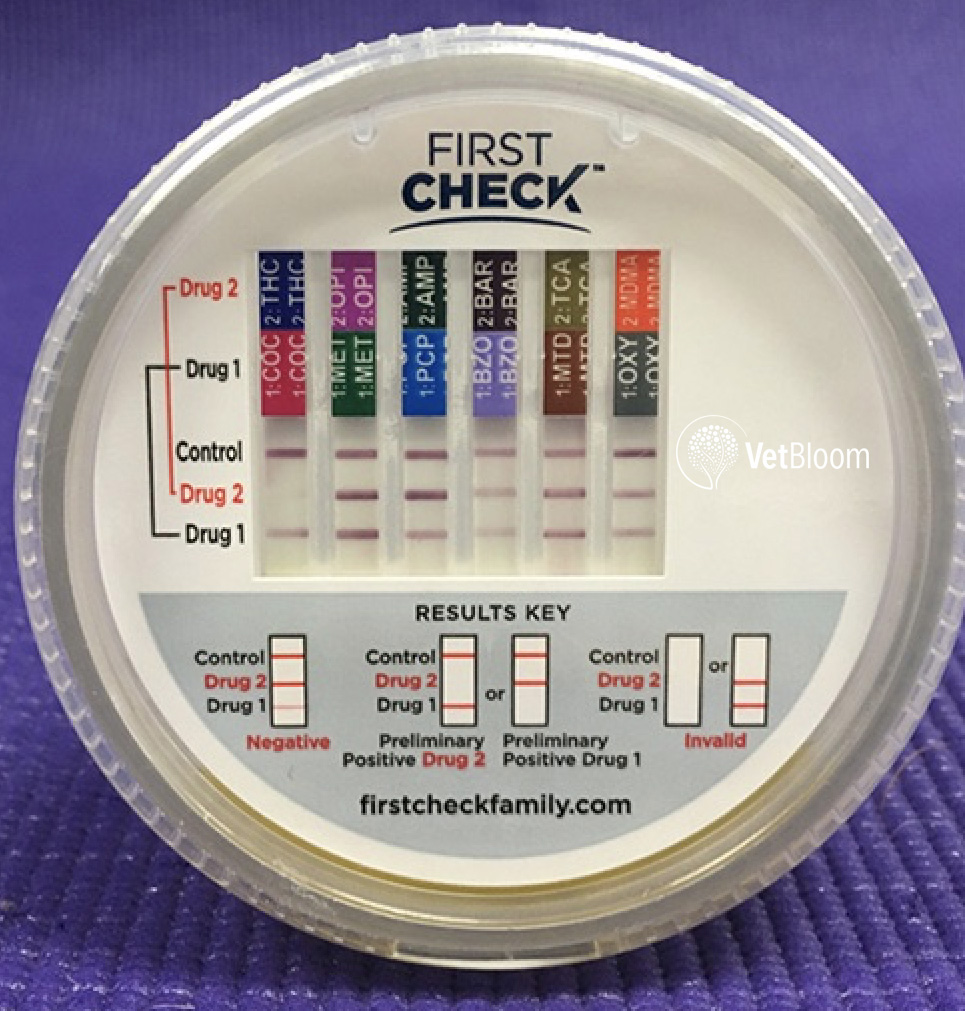 Urine drug test in a dog with marijuana toxicosis. THC is drug 2 in lane 1 – the lack of a line indicates a positive test result. Image courtesy of Dr. Mark Troxel, neuropetvet.com.

Definitive diagnosis can be difficult and is usually based almost entirely on clinical presentation.  Marijuana does not cause any specific clinicopathologic derangements.  Cannabinoids are detectable in stomach contents, urine, hair, saliva, and plasma.  Urine is the preferred sample in people because of higher concentration and longer detection time of metabolites.  At this time, there is no scientific test that reliably detects THC in the urine of canine patients.  (However, a positive result for THC can be helpful as there are few false positives with this test.) Analysis of canine urine has shown different metabolites produced in varying concentrations from those found in human urine. Many commercially available urine drug screening tests detect the most common metabolite found in human urine, 11-OH-Δ-9-THC.  This may account for the high rate of false negatives in canines as well as testing too recently after exposure and improper sample handling (THC binds to rubber and glass).

Most cases are only mild to moderately affected and can be treated on an outpatient basis with SQ fluids, +/- an antiemetic, and time. The prognosis is favorable to excellent for symptomatic patients. Hospitalization should be considered for severely affected patients (e.g. intractable vomiting, hypotensive, obtunded) or for management of co-intoxications. With supportive care, recovery is usually within 72 hours.

Contain herbs in addition to synthetic cannabinoid compounds and interact with the CB receptors. Human patients reportedly present with anxiety, paranoia, agitation, and delusions; clinical signs include tachycardia, dry mouth, and conjunctival injection.  There is limited data on animal exposures but common signs reported to the Pet Poison Helpline include ataxia, vomiting, hypersalivation, urinary incontinence, twitching, hyperesthesia, and mydriasis; no fatalities have been reported.  Decontamination should be performed if appropriate.  Agitation or CNS stimulation may be treated with benzodiazepines or phenothiazines. Recovery is expected within 24-48 hours.

My Tweets
It’s getting harder and harder to breathe: How I treat pneumonia

It’s getting hot in here: Heatstroke in dogs
Scroll to top