In last week’s article, we discussed current diagnostic approaches to chronic diarrhea. In this newsletter we will discuss several different steps in treating chronic diarrhea, especially when diagnostics such as biopsies, either via surgery or endoscopy, are not possible due to the status of the patient.

In managing chronic diarrhea, several treatment modalities should be pursued prior to starting immunosuppressive-type medications. A three-day deworming protocol with fenbendazole should be completed for possible undiagnosed parasites. Depending on exposure and past history, other deworming medications may need to be considered. A diet trial with a highly digestible, moderately fat-restricted diet should be pursued. Depending on response, an antigen-limited exclusion or lactose- and gluten-free diet should be considered. Novel protein diets, such as rabbit or venison, can be considered, as well as hydrolyzed protein diets, such as Hill’s Z/D, Purina HA or Royal Canin HP. Dividing meals into 2-4 feedings per day is recommended to help ease digestion. Adding fermentable fiber (psyllium; e.g., Metamucil), helps add bulk and promotes colonic health to help resolve loose stools. Because bacterial overgrowth is a common consequence seen with any cause of diarrhea, antibiotics are often used to help re-establish a healthy bacterial colony. Tylan at 10-20 mg/kg two to three times daily and metronidazole up to 15 mg/kg twice daily are most commonly used. These antibiotics may also have an effect on the mucosal immune system helping to reduce inflammation. Other aids in reestablishing a healthy bacterial colony can include prebiotics and probiotics. Prebiotics are a non-digestible food ingredient, such as fructans (e.g. inulin). They selectively stimulate the growth of and/or activate the metabolism of one or more health-promoting bacteria in the intestinal tract. Probiotics are actual live organisms that, when given in adequate amounts, may provide a clinical benefit. The benefit is achieved in part via competition with pathogenic bacteria or viruses for nutrients, or for receptor sites. Probiotics may also promote a modification of the metabolic activity of the intestinal microflora and can act in direct antagonism through the action of antimicrobial metabolites. Studies evaluating probiotics have shown a potential benefit with pancreatitis, general immune function, chronic renal disease and diarrhea, especially inflammatory bowel disease. Synbiotics are nutritional supplements containing combinations of pre- and probiotics that are also now commercially available. 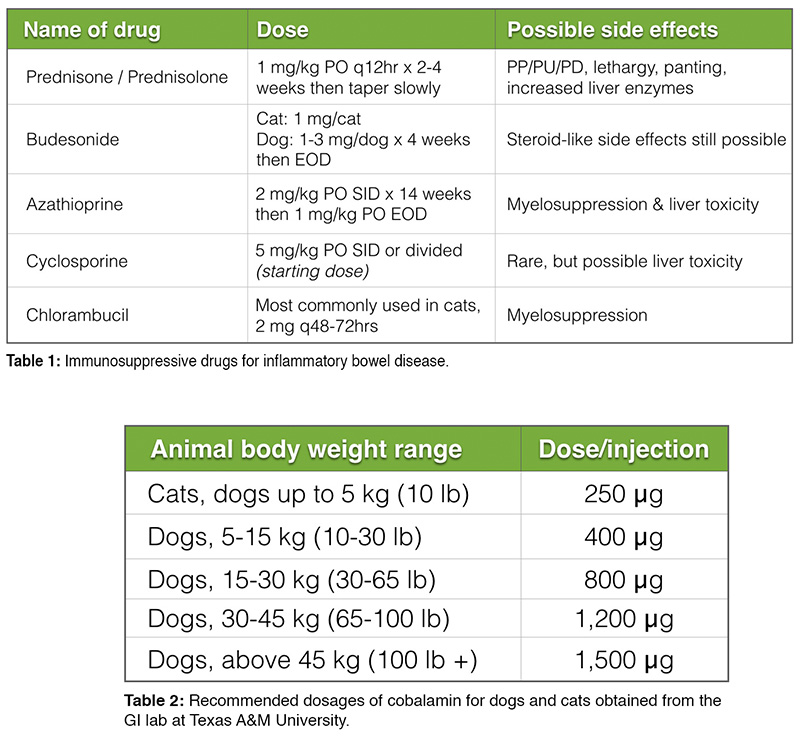 In cases where histopathology diagnosis confirms inflammatory bowel disease and no other underlying cause for inflammation has been found, treatment of idiopathic inflammatory bowel disease is pursued by adding immunosuppressive therapy. Glucocorticoid therapy using prednisone or prednisolone can be started at 1 mg/kg per os every 12 hours for 2-4 weeks then tapered slowly over weeks to months. Dexamethasone is avoided due to possible enhanced ulcerogenic effects, as well as its possible effect on brush border enzyme expression. Parenteral administration of steroids should be considered in cases of severe intestinal disease as mucosal absorption may be reduced and therefore inadequate after oral administration. Budesonide is an enteric coated, locally active steroid that can be considered in place of prednisone or prednisolone. Ninety percent of this drug is destroyed at first pass through the liver in humans; in dogs, it has been found that some of the drug is absorbed and can affect pituitary adrenal function, but perhaps not to the same extent as prednisone. It is dosed at 1 mg per cat and 1-3 mg per dog once daily for 4 weeks. Depending on response, the dose can then be reduced to every other day. As this medication does have the tendency to be ulcerogenic, care must be taken when switching from oral steroids to, or from, budesonide, as complications with concurrent or recent steroid administration may occur. Other immunosuppressive agents are used concurrently with corticosteroids especially with severe intestinal disease. Please refer to Table 1 for further information on dosing and side effects of other medications used in treatment of inflammatory bowel disease.

As discussed in the previous article, vitamin B12/cobalamin supplementation may be necessary to avoid worsening of clinical signs. Table 2 is adapted from Texas A&M and provides dosing information for subcutaneous cobalamin supplementation. When deficient, injections are given weekly for 6 weeks, then bi-weekly to monthly depending on follow-up cobalamin blood concentrations. As with other subcutaneous injections, owners can be instructed on how to give these injections to reduce the necessity of hospital visits. 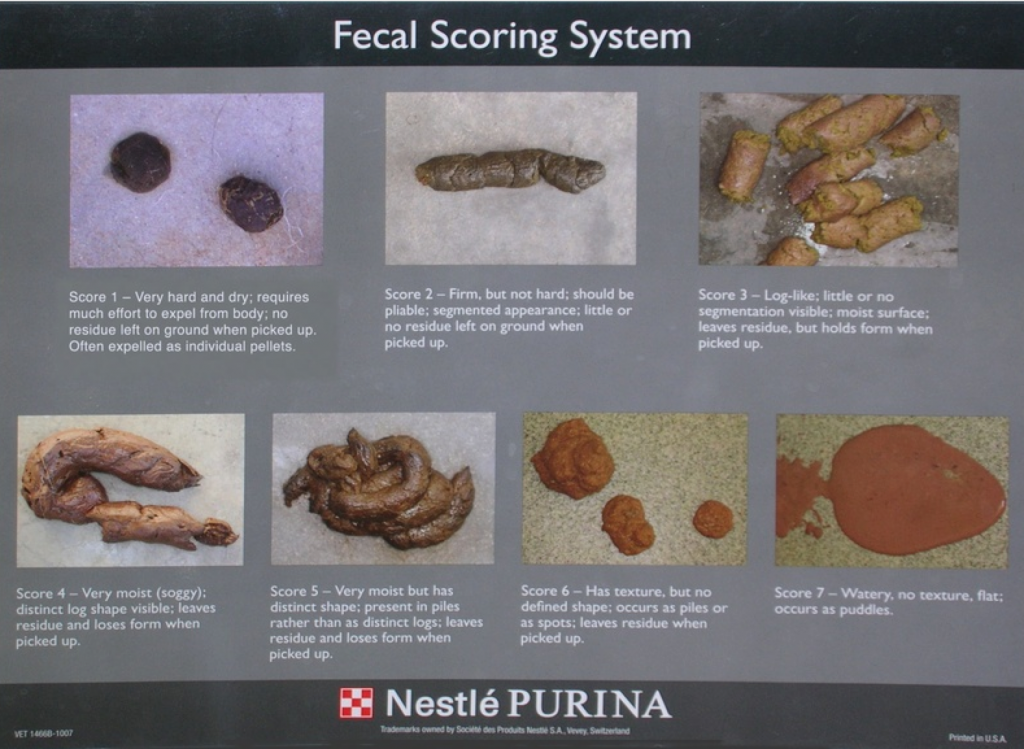 Monitoring of patients with diarrhea should include weight evaluation and a discussion with the owner about stool consistency. The fecal scoring system, such as the one provided by Purina, Inc. (Fig. 1), may also be useful in judging outcome of treatment. Follow up blood work may be necessary to evaluate protein levels and other organ function. Re-evaluation with ultrasound may be useful to assess resolution of intestinal wall thickening and other previously noted changes. Lastly, repeating biopsies may be necessary depending on response to treatment, or if at any time signs worsen despite treatment.

One of the differential diagnoses for Boxers as well as other breeds of dogs presenting with large bowel diarrhea is histiocytic ulcerative colitis. Specifically clinical signs described include diarrhea, hematochezia, increased frequency of defecation, tenesmus and presence of increased mucus. Physical exam findings may be normal however weight loss can be seen in severe cases. Ultrasound may reveal a thickened colonic mucosa but may also be normal. On colonoscopy, areas of ulceration and hemorrhage may be noted along with areas of normal colonic mucosa. The pathognomonic histopathologic lesion for this disease is colonic mucosal infiltration of large numbers of macrophages staining positive for periodic acid-Schiff staining, along with mucosal ulceration and goblet cell loss. Histiocytic ulcerative colitis was considered an immune-mediated disease that usually resulted in a poor outcome despite treatment. In recent years, it has been documented through culture and special staining that Escherichia coli is in part the causative agent of this disease. In addition to E. coli infection, genetics have been hypothesized as a role in the pathogenesis of this disease. A defect in the immune system, specifically the function of the macrophages has been suspected. Treatment is usually successful with a prolonged 8-10 week course of enrofloxacin; however, more recent studies have shown increased resistance of E. coli to enrofloxacin. Therefore, colonic mucosal samples should be obtained for culture and possibly special staining so that accurate treatment can be administered. 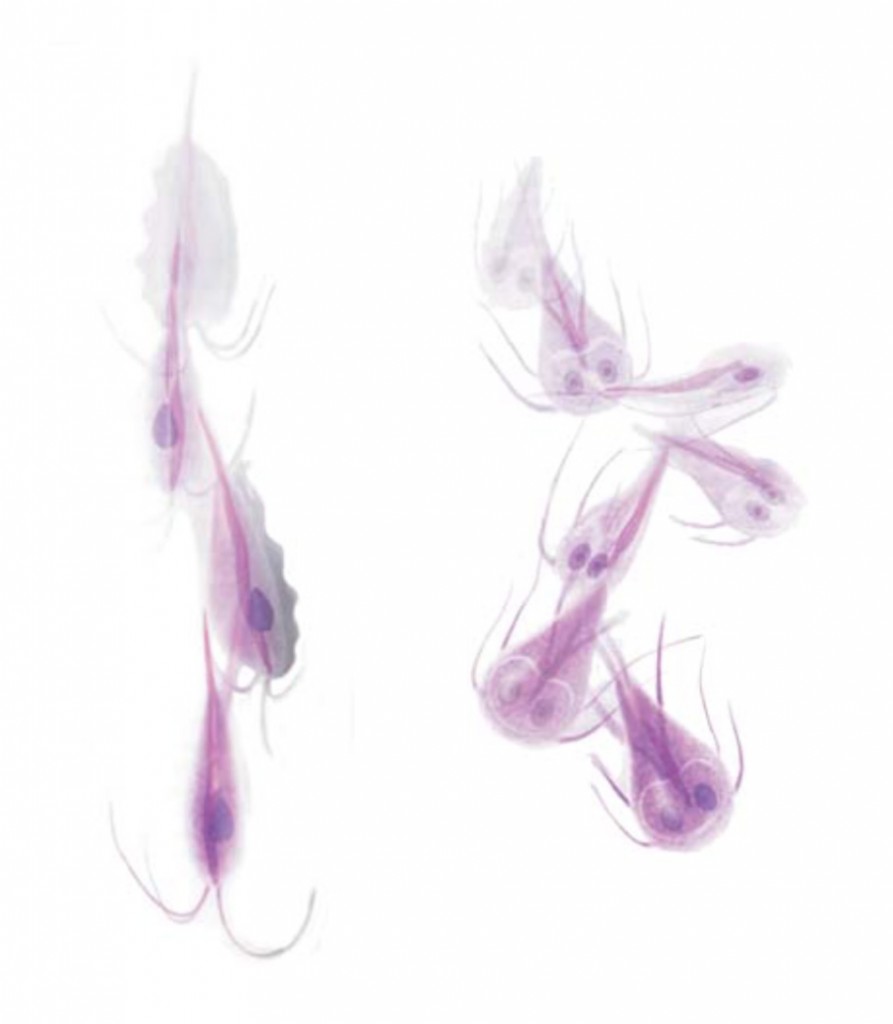 Tritrichomonas foetus is a protozoal infection that has been documented as a pathogen in cattle causing infertility and abortion. More recently it has been found as a causal agent of diarrhea in cats. It is transmitted via the orofecal route and causes persistent, malodorous diarrhea that often also has blood or mucous in it. It occurs in otherwise healthy, usually young cats that have a good appetite and do not have weight loss. Semi-formed feces, fecal incontinence and an edematous painful anus may also be noted. Often cats will initially respond to antibiotics but then relapse immediately after cessation of therapy. Diagnosis of this infection is pursued via fresh fecal testing including direct fecal examination, using the In-Pouch fecal culture system or PCR testing of fresh feces. PCR is the most sensitive, however also most costly of all of these tests. When evaluating for Tritrichomonas foetus with direct fecal examination, it is important to differentiate this organism from Giardia spp. Tritrichomonas foetus has a undulating membrane (Fig. 2, left) and will have rigorous movements compared to Giardia spp. (Fig. 2, right), which has a falling leaf-like motility. Treatment for cats is targeted towards the actual organisms, but care should be taken to diagnose any other infections, as co-infection with Giardia spp. or Cryptosporidium spp., among others, is common and complete treatment is necessary for resolution of signs. Ronidazole is the treatment of choice at this time although resistance has recently been documented and new drug therapies will need to be investigated. Client consent is needed when using this drug as it is not approved for use in the United States. Dosing is at 30 mg/kg per os once daily for 14 days. Side effects of this medication include lethargy, inappetence, ataxia and seizures, however signs usually resolve if the drug is withdrawn as soon as side effects are noted. This drug should not be used in kittens <12 weeks old, pregnant or nursing queens, or cats that are systemically ill. If the infection remains untreated, diarrhea can resolve over time but cats remain infected and become carriers, and therefore a source of infection for other cats. Treatment usually resolves the infection, however if diarrhea recurs retesting should be considered. Possible causes for recurrence of the infection include re-infection through another cat in the house, or through a contaminated litter box, as well inadequate dosing during the course of treatment.

My Tweets
Every patient, every time: Basic nursing assessments for hospitalized patients...

Minimally invasive treatment options: The use of stents in the veterinary p...
Scroll to top