The use of stents in the veterinary patient is constantly expanding. Requests from owners for minimally invasive treatment options and palliative care options are steadily increasing. This article discusses some of the more common stents used in veterinary medicine.

Tracheal collapse is graded on a scale of I-IV, with grade I being mild and less than 25% occlusion of the lumen, and grade IV being complete luminal occlusion. Clinical signs range from a chronic non-productive cough and exercise intolerance, to severe dyspnea and cyanosis. Stress can exacerbate the clinical signs and lead to patient collapse. 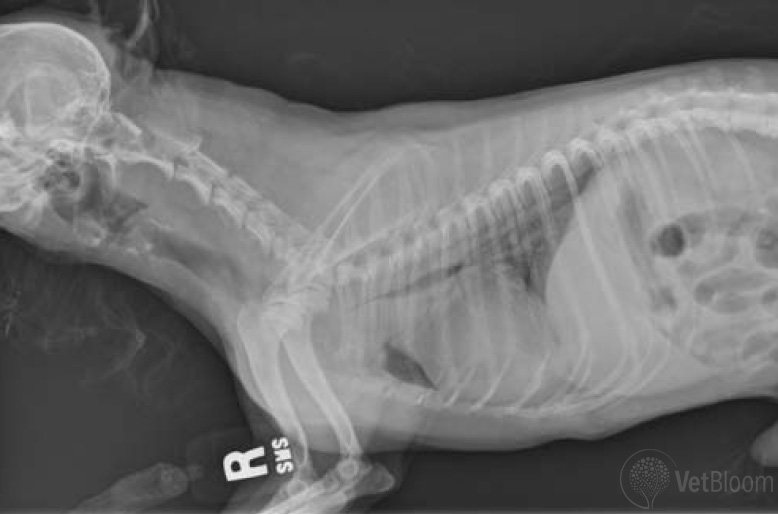 Fig. 1: Diagnosis of tracheal collapse (Grade IV) through the use of thoracic radiographs. Note the complete luminal occlusion present at the thoracic inlet.

Diagnosis of tracheal collapse occurs through the use of thoracic radiographs and fluoroscopic evaluation of the airways. Bronchoscopy may be performed concurrently and is useful to assess the presence of disease or collapse in the lower airways, as well as to obtain a cytologic sample (fig. 1).

Medical management of tracheal collapse involves bronchodilators, anti-inflammatories, cough suppressants, sedation and weight management. Medical management can be effective for dogs with mild to moderate clinical signs; however some dogs with severe clinical signs and/or complete luminal occlusion require either surgery or alternative intervention. Surgical procedures are available for both cervical and intrathoracic tracheal collapse, however they are associated with complications and increased patient morbidity when compared with the placement of an intraluminal tracheal stent with fluoroscopic guidance. This minimally invasive alternative for these patients is associated with reduced morbidity and mortality and shortened hospital stays.

Patients are administered oxygen, bronchodilators, cough suppressants, and sedation as needed pre-procedurally. The patient (either awake or with mild sedation) undergoes fluoroscopic evaluation of the upper airway, trachea, mainstem bronchi and diaphragm. The patient is then anesthetized and radiographs are obtained under positive pressure and negative pressure ventilation, to measure minimal and maximal tracheal luminal diameter. If the patient is diagnosed with severe tracheal collapse, or the severity of clinical signs warrant, a stent can be placed. With fluoroscopic guidance, the stent is introduced into the endotracheal tube via a bronchoscopy adaptor and advanced into the trachea. The stent length is chosen to span the majority of the tracheal length to avoid progressive tracheal collapse cranial and caudal to the stent. The stent is then deployed into the tracheal lumen with simultaneous extubation. 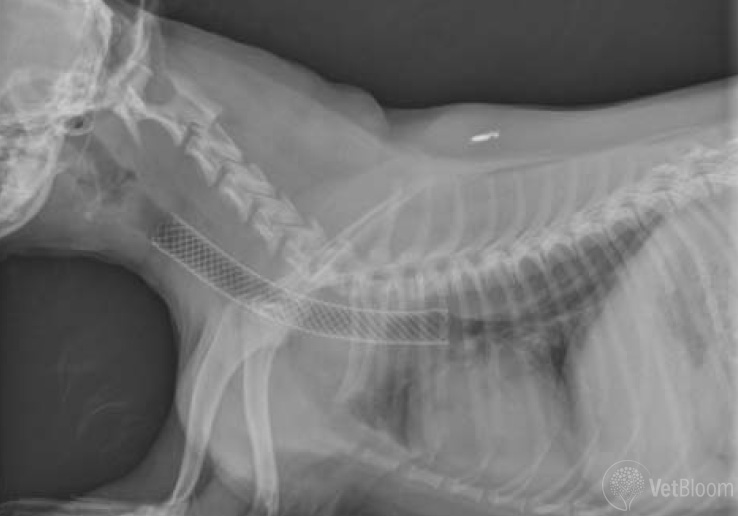 The majority of patients exhibit a significant immediate improvement in respiratory function as the upper airway obstruction is relieved. A cough may still be present and must be managed medically as appropriate to the patient’s needs. The persistence of cough is attributed to the chronic nature of the disease, a chronic inflammatory response already being present at the time of diagnosis and stent placement, and concurrent lower airway disease if present (fig. 2).

Tracheal stenting may also be used in the cases with static tracheal narrowing, as can be seen with tracheal stenosis or tracheal stricture following previous tracheal surgery or secondary to malignancy.

Stenting of malignant obstructions is a broad way to think about stenting applications. Currently stents are being placed as palliative treatment for obstructions in the nasopharynx, esophagus, trachea, urethra, ureters, colon, and vasculature in the veterinary patient. This is being carried out both in patients who have exhausted standard treatment options and in those for whom the owner is seeking a less invasive alternative.

Dogs with urethral, prostatic and pelvic tumors can develop partial or complete urethral obstructions. The most common tumor type causing urethral obstruction is transitional cell carcinoma (TCC). TCC is reported with greater occurrence rates in smaller breed female dogs (Scottish Terriers, Shetland Sheepdogs and Beagles). Clinical signs may include dysuria, stranguria, pollakiuria, hematuria and incontinence. For the patient with a chronic partial urethral obstruction, the clinical signs can significantly reduce a patient’s quality of life and bear a burden on the owner. These patients are often treated with anti-inflammatories and chemotherapy to slow tumor progression. For patients with complete urethral occlusion secondary to neoplasia, surgical options are often limited and include placement of a permanent cystostomy tube. A cystotomy tube requires a significant commitment on the part of the owner to maintain daily cleanliness and consistent emptying of the tube. 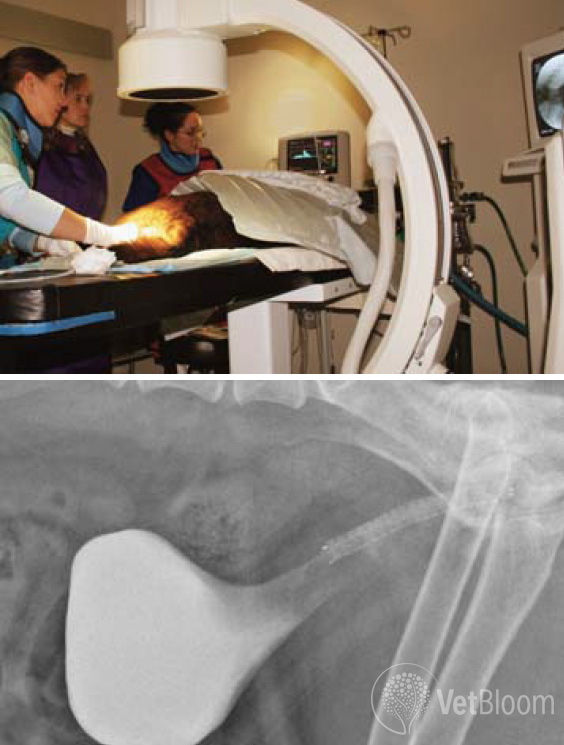 Fig. 3: Placement of a urethral stent in a patient with TCC. Note the irregular urinary bladder shape and large filling defect cranial and dorsal to the stent secondary to the TCC.

Diagnosis of a malignant urethral or urinary bladder trigonal obstruction is often initially made by ultrasound examination. The patient then undergoes a retrograde cystourethrogram to assess and measure the length and diameter of the stenosis or occlusion. With fluoroscopic guidance, a urethral stent is introduced retrograde into the urethra and placed to span the extent of the stenosis, with an attempt made to avoid the urethral sphincter and spare normal mucosa when possible. It is estimated that fewer than 20% of patients with indwelling urethral stents, have permanent incontinence post-procedurally. This is even less for males than females when further divided by sex of the patient. Placement of a urethral stent can extend a patient’s survival time with a good quality of life, and minimal daily commitment on the part of the owner. Most patients are able to void voluntarily immediately following the procedure. Persistent clinical signs are attributed to the primary disease and chronic inflammation, rather than to the stent itself.

As mentioned previously, the application of stents to relieve malignant obstructions can be utilized in a variety of anatomical locations in a patient. This course of therapy is for palliative treatment as it does nothing to treat the underlying disease, but seeks to reduce the severity of clinical signs and improve quality of life. Stenting is often employed in conjunction with chemotherapy and other medical therapies (fig. 3).

Stents can be deployed in the cranial or caudal vena cava to relieve caval obstructions, such as can occur with adrenal or hepatic tumors. Vascular caval stents are used also to facilitate coil embolization of intrahepatic portosystemic shunts.

Surgical attenuation of such vascular anomalies requires hepatic parenchymal dissection to isolate the vessel of interest and is associated with high morbidity and mortality as a result of hemorrhage or acute rise in portal pressure.

IHPSS are initially diagnosed by ultrasound examination. It is recommended that patients are on medical management for hepatic encephalopathy for at least 6 weeks prior to shunt coil embolization, or have achieved the majority of skeletal growth (8-10 months of age). For shunt size and morphology assessment, a computed tomography (CT) – portogram is usually performed. The axial imaging provided by CT allows for enhanced understanding of the shunt morphology prior to catheterization and for caval diameter measurements. 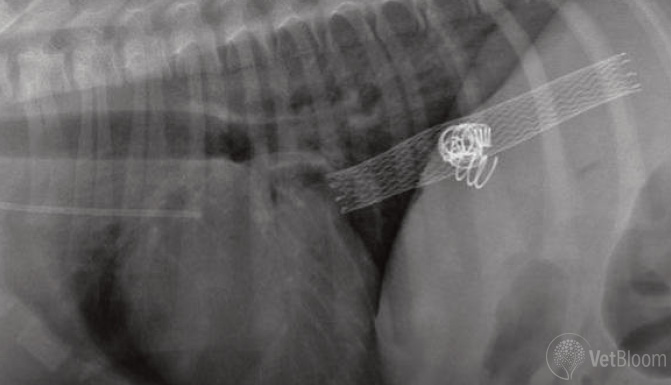 Fig 4: Post-procedural radiograph following placement of a vascular stent within the caudal vena cava and thrombogenic coils within the foramen of the IHPSS.

A transjugular venous approach has been developed to attenuate a portocaval shunt from the point of communication of the shunting vessel and the intrahepatic portion of the caudal vena cava. Diagnostic angiographic catheters are introduced into intrahepatic caudal vena cava via the jugular vein. Dual caval venography and shunt portography is performed to demonstrate shunt morphology. A vascular stent is introduced into the caudal vena cava and is deployed to span to foramen of the shunt at the junction with the caudal vena cava. Thrombogenic coils are then introduced into the shunt vessel (fig. 4) through the interstices of the stent. Portal pressures are measured in conjunction with coil deployment to assess for portal hypertension (and to decrease risk of this complication). Attenuation of the foramen of the shunt occurs secondary to thrombus formation around the intravascular coils. This minimally invasive treatment option can significantly reduce patient morbidity and mortality when compared with traditional surgical treatment.