Many immunomodulating drugs have been developed over the past 50 or so years to treat immune-mediated disease and improve transplant success. In veterinary medicine most immunomodulation relies on chemotherapies such as glucocorticoids, azathioprine, leflunomide, cyclosporine and mycophenolate mofetil. As with many treatment modalities in veterinary medicine, these were developed for use in humans and the doses are largely extrapolated from human medicine. 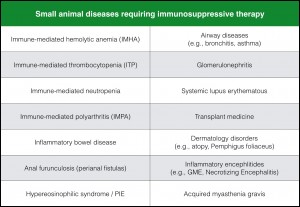 There is little data in veterinary literature regarding the use and efﬁcacy of these medications, with cyclosporine being the exception. Each of these medications has a unique mechanism of action, set of potential adverse effects and variable onset of action. Additionally the cost of these medications can vary greatly. The goals of therapy are to control the aberrant response of the immune system. This can require multi-drug therapy, and some trial and error with different combinations and dosing of the medications. Use of multiple medications is generally to minimize side effects associated with higher doses of a single medication. Once remission is achieved, the drug therapy is tapered to determine the lowest possible dose that controls the disease process. As many of these disease processes (Table) require long term, or even life-long therapy, it is wise to anticipate this and modify treatment depending on what owners are able to realistically manage for a minimum of 6-12 months. Also, as there is no one perfect protocol for many of these diseases, it is imperative that clinicians become familiar with the risks and beneﬁts of the available medications to allow for individualized treatment plans for the patient. 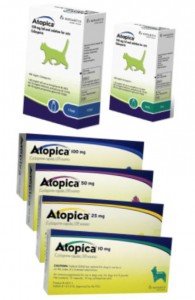 Cyclosporine is widely used in dogs. It has a fairly rapid rate of onset of a few days and most veterinarians are comfortable with its indications and risks. The mechanism of action of cyclosporine is on the T cells, by inhibition of calcineurin which is necessary for production of cytokines. This therefore allows for T cell activation with a lesser effect on the humoral immune system. The modiﬁed form (Atopica/Neoral – Fig. 1) is more reliably absorbed and bioavailable compared to the non-ultramicronized form (Sandimmune) so use of these forms is recommended. Metabolism of cyclosporine predominantly occurs in the liver via the P-450 microsomal enzyme pathway. As a result, caution must be used in conjunction with other medications metabolized through this system. Dosing of cyclosporine depends on disease process. Dermatological disorders such as atopy start at a relatively low, once daily dosing of 5mg/kg, while dosing for other immune diseases tends to be higher at 5mg/kg twice daily. Higher does will increase the likelihood of side effects and cost to owners. Adverse effects that have been reported include, but are not limited to:

Azathioprine is a purine analog that works by antagonizing purine metabolism, and inhibiting RNA, DNA synthesis and mitosis. Inhibition occurs in both B and T cell function, but has more delayed hypersensitivity and cell mediated effects overall. Unlike cyclosporine, azathioprine can take weeks to take full effect and this varies between animals. It has been widely used in veterinary medicine with variable outcomes depending on disease process. Adverse effects include:

These occur unpredictably as the amount of metabolic enzyme varies greatly from dog to dog. Anecdotally, the generic form of this medication may have a higher rate of hepatotoxicity, so use of the more costly brand name drug, Immuran, is recommended. In most cases adverse effects can be minimized by tapering to every other day dosing after a 5-7 day loading period of once daily dosing. Additionally dogs weighing in excess of 30-40 kg should be dosed on m2 dosing and the total dose should not exceed 75mg. Monitoring requires CBC/chemistry every 1-2 weeks for the ﬁrst few months, then as needed based on primary disease.

Mycophenolate mofetil (MMF) also acts to inhibit purine synthesis and acts on both B and T cells. Unlike cyclosporine and azathioprine, experience in veterinary medicine and reports in the literature are currently limited so it is generally utilized in refractory cases. However, my experience has been for use in IMHA, ITP, IBD and IMPA with overall positive response (no statistical data available). This medication was originally developed for humans as a less myelosuppressive agent than azathioprine, although it may occur with other side effects being predominantly intestinal in origin and dose dependent. 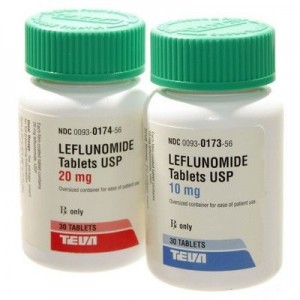 Fig. 2: Leflunomide has been used in a variety of immune-mediated diseases and is being evaluated for its ability to prevent replication of feline herpes in in vitro models.

Leﬂunomide (Fig. 2) is a T and B cell inhibitor and acts by interrupting DNA and RNA synthesis with antiproliferative effects in smooth muscle and ﬁbroblasts as well. The drug is converted to the active metabolite, A77 1726, in the intestines; it is highly protein bound and cleared by the liver. Toxicity is predominantly intestinal, secondary to accumulation of metabolite and is dose dependent; dogs require a lower dose than that used in humans, however cats seem to be less sensitive. Monitoring is carried out based on underlying disease process and evaluation of drug serum levels. Approved for use in rheumatoid arthritis in humans, it has been shown to control allograft rejection in experimental animal models and has been used in a variety of diseases such as immune-mediated thrombocytopenia, multifocal non-suppurative encephalitis/meningomyelitis, polyarthritis, pemphigus foliaceous and systemic histiocytosis in dogs. Interestingly, this medication is being evaluated for anti-viral therapy and it has been shown to prevent replication of the feline herpes virus in in vitromodels.

Intravenous IgG is a blood product developed using healthy human donors, and is approved for use in immune-mediated cytopenias in humans. While exact mechanisms are not entirely understood, suppression of immune destruction includes: blockade of macrophage FCC receptors, modiﬁcation of compliment activation and possible down regulation of antibody production. The incidence of adverse effects is reportedly low but includes: Allergic reactions Proteinuria Ocular changes Transient thrombocytopenia It has been used with variable success in dogs with immune mediated cytopenias thus far and appears to be effective in approximately 30% of cases which is similar to human data. More promise has been observed in adverse cutaneous drug reactions such a toxic epidermal necrosis. The cost of this treatment is currently quite high ($600-1,000) therefore its use is generally reserved for refractory cases.

The options for immunomodulation in dogs are expanding beyond standard glucocorticoid therapy. This is allowing for fewer struggles with glucocorticoid side effects and improved control of refractory disease. As with many other aspects of veterinary medicine there is a paucity of evidence for use of most of these treatments, so clinician preference and anecdotal evidence unfortunately still dominates. However the ongoing research in humans and animals is exciting and will hopefully continue to provide guidance for therapy of these frustrating immune-mediated diseases.