Performing a good neurologic examination with proper neurolocalization is critical for devising a suitable list of differential diagnoses with subsequent treatment plans with patients presenting with neurological diseases. The aim of this post is to review functional neuroanatomy and neurolocalization as it pertains to lesions within the central and peripheral nervous systems.

Aspects of the neurologic examination

As with any examination, being consistent is immensely important. This should begin with reviewing the complete history and performing a full physical examination. The neurologic examination can then be focused upon, again with attention to consistency and documentation.

The key to performing an accurate neurologic examination is perfecting one’s examination skills, first on a normal patient. Once one feels confident in knowing what is “normal”, comfort in identifying the “abnormal” and localizing the lesion will come more naturally.

When trying to gain a neuroanatomical diagnosis, it is always best to start broadly, then narrow the focus. The intent of the neurologic exam is to “interrogate” or evaluate different aspects of the nervous system that are specific to a particular area. Although there will inevitably be some overlap, ideally the multi-faced aspect of the exam will help indicate the location of the lesion.

With an anatomic diagnosis, one can determine a reasonable list of differential diagnoses, with significance granted using the previously reviewed evaluation of signalment and history.

While it is important to have an understanding of neuroanatomy from a global veterinary perspective, being a good clinician does not require an in-depth knowledge of neuroanatomy. Clinical neurology requires only an understanding of functional neuroanatomy and lesion localization is, to a large extent, a matter of pattern recognition. That being said, there are a few neuroanatomical pathways that are important to know (e.g., visual pathway, sympathetic pathway leading to Horner Syndrome, cutaneus trunci reflex).

After performing a complete neurological exam, as well as a general physical exam and orthopedic exam (especially if any lameness or weakness), there are two questions that you should ask yourself:

This may seem very simplistic, but they are important questions to ask yourself with every patient. Never assume that a patient that is weak or unable to walk has a herniated disc or other neurological disorder. Many non-neurologic conditions mimic neurologic disease. For example, a dog that has bilateral cranial cruciate ligament tears or a cat with aortic thromboembolism may be unable to walk.

The next step is to consider each of the individual neurologic abnormalities noted on exam and identify where the lesion could be located for each abnormality. This is how I teach students that are first learning how to localize lesions.

Case example: You are presented a cat with a sudden onset of circling to the right.  On neurologic exam, you discover an absent menace response in the left eye and postural reaction deficits in the left thoracic and pelvic limbs.  Now formulate a list of abnormalities and possible lesion locations.

Look back at your list to see if one lesion location is present in all of the abnormalities. For this patient, the only location listed for all three abnormalities is the right forebrain. Next, ask yourself if this makes sense to you. The patient is circling, which also can be seen with vestibular disease, but did you see any other clinical signs that would suggest vestibular dysfunction (e.g., head tilt, nystagmus, ataxia)? Always try to localize the lesion to one location, but never forget that multifocal disease is possible. 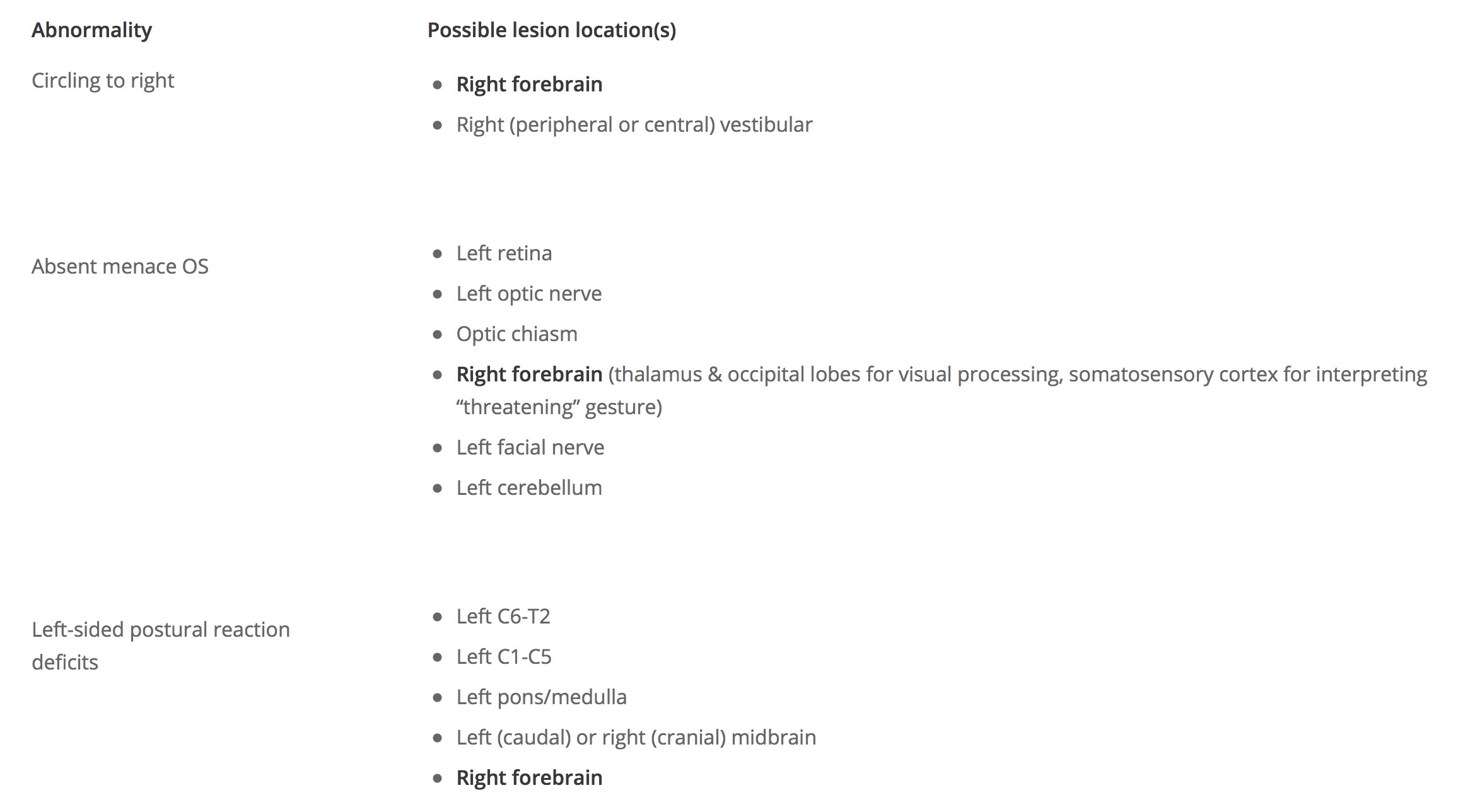 The nervous system can be divided into several functional regions where disease leads to a “typical” group of clinical signs referred to as neurologic syndromes.

A great deal of day-to-day clinical neurology involves pattern recognition. As you become more experienced with the neurologic exam and neurolocalization, you’ll start to recognize these particular syndromes and be able to localize the lesion without having to mentally or physically formulate a list as described above. Listed below are the common clinical signs associated with each functional region of the nervous system, adapted from the excellent veterinary neurology textbook, Clinical Syndromes in Veterinary Neurology by Kyle G. Braund, 2nd ed.

The forebrain includes all structures rostral to the midbrain, including the cerebral hemispheres, thalamus, hypothalmus, epithalamus, and subthalamus. The thalamus is anatomically the rostral end of the brainstem, but is functionally similar to the cerebrum.

The brainstem consists of the midbrain, pons, and medulla oblongata. Some people separate the clinical signs associated with dysfunction of the midbrain, pons, and medulla oblongata, but it’s often difficult and, quite frankly not very common, to cleanly localize the lesion to just the midbrain or pons. It’s certainly possible for a patient to show only dysfunction of cranial nerves III or IV suggesting midbrain disease, but patients more commonly have clinical signs referable to multiple areas of the brainstem.

Important structures in the brainstem include the nuclei giving rise to most of the cranial nerves (III-XII), the Ascending Reticular Activating System (ARAS) controlling level of consciousness, the chemoreceptor trigger zone, and the heart rate and respiratory centers. Additionally, the primary gait generators for dogs and cats are located in the brainstem (likely midbrain), involving the extrapyramidal tracts (e.g., rubrospinal tract). 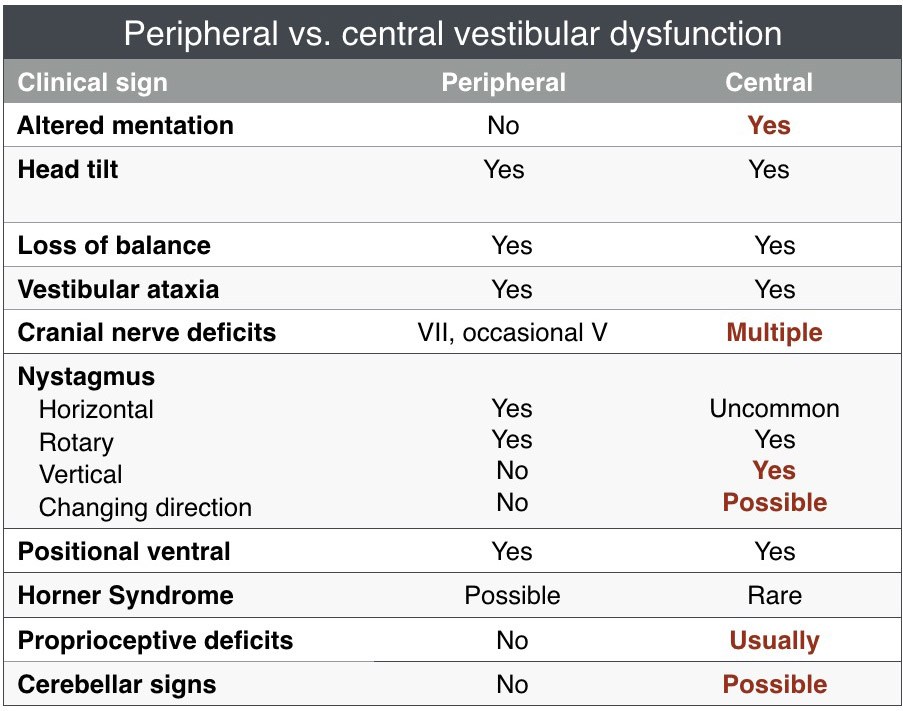 DIstinguishing peripheral from central vestibular dysfunction. NOTE: Disorientation is possible for both PVD and CVD, but patients with PVD should remain responsive. Care should also be taken localizing the lesion in patients whose only sign of central vestibular dysfunction is vertical nystagmus. Some patients with PVD will appear to have a vertical nystagmus when it actually has a slight rotational component.

Case example: A 10-year-old MC Greyhound is presented to you with an acute onset of non-progressive clinical signs of right head head tilt, vestibular ataxia, resting & positional left rotary nystagmus, and left-sided postural reaction deficits. In this patient, the head tilt and nystagmus suggest a right-sided lesion while the postural reaction deficits suggest a left-sided lesion. The neuroanatomic diagnosis for this patient would be left paradoxical central vestibular.

Otitis interna is the most common cause of bilateral peripheral vestibular dysfunction, but bilateral signs certainly can be observed in patients with other conditions (e.g., hypothyroidism). These patients often are presented with signs of vestibular dysfunction, including vestibular ataxia (often to both directions) and horizontal or rotary nystagmus. Many of these patients do not have a head tilt, or they have a head tilt that intermittently changes sides. Patients often walk low to the ground or crouched and will have wide side-to-side lateral head excursions.

Vestibular dysfunction due to thalamic disease

Just to confuse things even more, central vestibular signs occasionally occur secondary to a thalamic lesion, most often due a thalamic infarct. This is not very common. It is more important to remember the basic rules of localizing peripheral vs. central dysfunction.

The cerebellum is responsible for rate and range of motion, fine motor control, and equilibrium.

Disease in this region of the spinal cord typically causes signs of UMN dysfunction in all 4 limbs.

Disease in this region of the spinal cord typically causes signs of UMN dysfunction in the pelvic limbs and normal thoracic limbs.

Disease in this region of the spinal cord typically causes signs of LMN dysfunction in the pelvic limbs and normal thoracic limbs.

My Tweets
Cytology vs. biopsy: Comparisons of accuracy [Part 2]

Scratching the surface: Management of corneal ulcers in the ER
Scroll to top