Thiamine is a water-soluble, heat-labile vitamin (vitamin B1) that plays a crucial role in carbohydrate metabolism. Dogs and cats are unable to endogenously synthesize thiamine so it must be obtained from the diet. Thiamine deficiency can occur in the following circumstances:

Even though this has been known for some time, dogs and cats are still at risk of thiamine deficiency from inadequate supplementation because of occasional manufacturing or storage errors. A recent report (Chang et al., 2017) described 17 cats with thiamine deficiency that were fed the same commercial dry cat food. Thiamine is easily destroyed by high temperatures, chlorinated water, and a neutral or alkaline state. As a result, pet food manufacturers must add very high levels of thiamine to the food to compensate for loss during manufacturing. Additionally, thiamine content declines with long-term storage, likely due to a combination of heat and humidity. 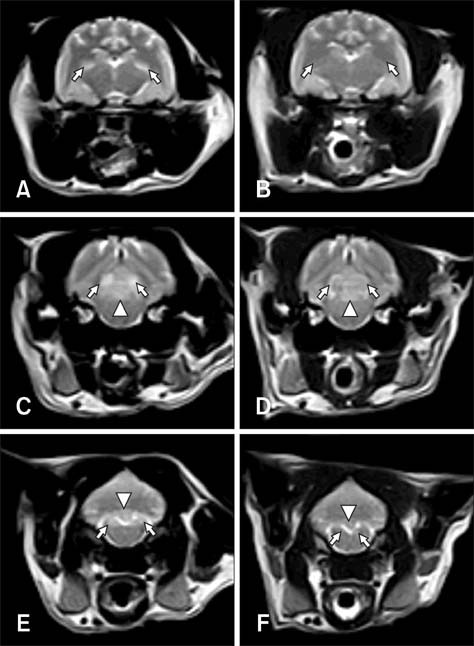 Transverse T2-weighted MR images (WI) of (A, C, and E) a cat with thiamine deficiency (Case 1). (A) At the level of the thalamus, symmetrical hyperintense signals at the lateral geniculate nuclei (arrows) were noted. (C) Images of the caudal colliculi (arrows) and periaqueductal gray matter (arrowhead) revealed the presence of hyperintense lesions. (E) Bilateral symmetrical hyperintensities were also evident in the medial vestibular nuclei (arrows) and cerebellar nodulus (arrowhead). After three weeks of thiamine administration, transverse MR images showed that the lesions had resolved except for ones in the cerebellar nodulus (B, D, and F). From: J Vet Sci. 2013 Dec;14(4):499-502.
http://dx.doi.org/10.4142/jvs.2013.14.4.499

Thiamine deficiency can occur in dogs and cats of all ages and breeds.

Thiamine deficiency should be suspected in patients with compatible clinical signs and dietary changes as noted above. Routine laboratory tests (CBC, biochemical profile, urinalysis) are usually normal. MRI may show bilaterally symmetrical T2-weighted hyperintense lesions in the thalamus, caudal colliculi in the midbrain, and vestibular nuclei in the medulla. CSF is usually normal.

Therapy is generally centered around replacing thiamine and feeding a high-quality diet known to be rich in thiamine. There is limited data in the literature regarding recommended doses, but most sources recommend daily intramuscular injections of thiamine (vitamin B1; 25-50mg) until resolution of clinical signs.

The prognosis for thiamine deficiency is good to excellent if diagnosed and treated early.