Sudden acquired retinal degeneration syndrome (SARDS) is an idiopathic retinal disorder in dogs that results in sudden and permanent bilateral vision loss, initially without apparent ocular lesions. SARDS occurs due to a sudden loss of function of the retinal photoreceptor cells (rods and cones), though the inciting cause of this photoreceptor dysfunction remains unknown. SARDS is a leading cause of currently incurable vision loss in dogs with a high impact on quality of life due to acute vision loss and frequent co-occurrence of systemic abnormalities and age-related health problems.1

SARDS most commonly affects middle-aged to older dogs in the range of 7-10 years of age, with a median age of 9 years.2 Female dogs are often overrepresented in many reports. SARDS can affect any breed, though those most commonly reported include the Dachshund, Miniature Schnauzer, Pug, Brittany Spaniel, and Maltese.2 Small dogs less than 25 pounds of body weight are most commonly affected, comprising 60% of patients in one study with only 8% of SARDS patients being greater than 50 pounds.2

The SARDS patient typically presents with obvious navigational visual deficits (i.e., bumping into objects in the exam room), bilaterally absent menace response and dazzle reflex, and bilateral mydriasis with severe reduction in the PLR. Examination of the anterior segment reveals a clear ocular media (cornea and lens) to allow examination of the fundus. In the acute presentation, no significant detectable abnormalities are noted on the fundus exam. With time (several weeks to years), the retina of the SARDS patient will show evidence of diffuse generalized retinal degeneration (tapetal hyperreflectivity, vascular attenuation, and atrophy of the optic nerve). 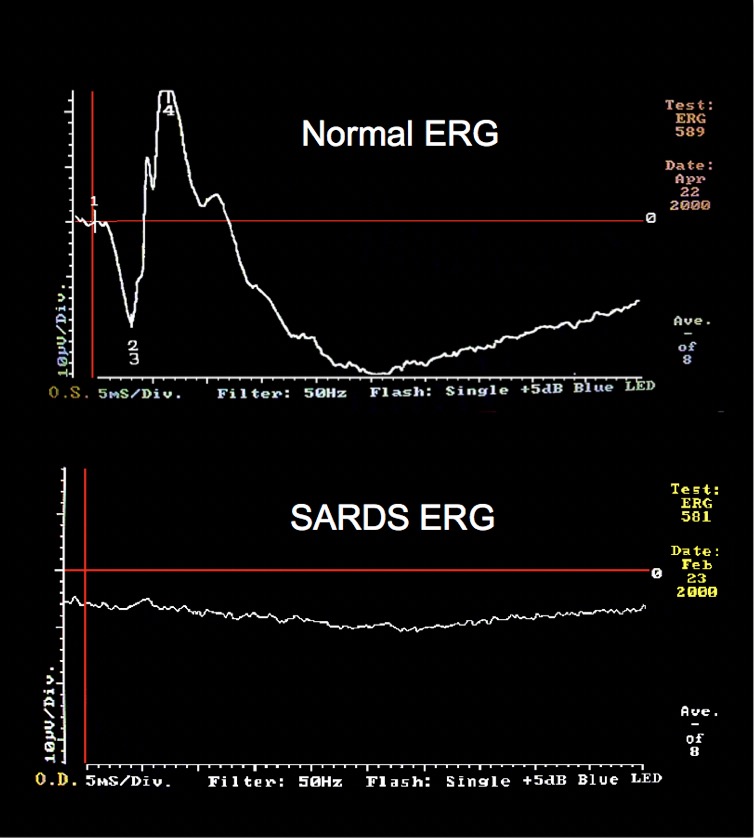 In the acutely blind dog with a normal ophthalmic exam, the flat-line ERG is diagnostic for SARDS. In patients with this presentation and a normal ERG (and thus indicating normal function of the retina), neurologic or central causes of blindness are considered. As such, further diagnostics, such as MRI and CSF evaluation, would be needed for definitive diagnosis in these patients.

The term amaurosis is a clinical diagnosis that describes partial or total blindness without visible change in the eye. Differential diagnoses for amaurosis in dogs include retinal disease (SARDS), optic nerve disease (involving the retrobulbar or intracranial portions of the optic nerve, which are not visible on ophthalmic exam), or central/cortical causes of blindness (lesions in the occipital lobe). In dogs presenting with amaurosis, the final diagnosis is SARDS in 86% of cases and neurologic disease in 14%.3 Patients with optic nerve disease or central blindness will have a normal ERG. In cases of cortical blindness, the PLR and dazzle reflexes will be intact since these reflex pathways are entirely subcortical.

Sudden onset blindness is frequently associated with a constellation of systemic signs, hence the inclusion of the term “syndrome” in the SARDS name. Such systemic signs are variable in occurrence and severity, and when present they often occur weeks to months prior to the onset of vision loss. In one recent study of 100 dogs diagnosed with SARDS,4 only 16% had no other clinical signs besides blindness. The most commonly reported systemic signs were weight gain (75%) and polyphagia (69%) with other common signs including lethargy, polyuria, polydipsia, and panting. In addition, laboratory abnormalities suggestive of hyperadrenocorticism (lymphopenia/neutrophilia, low urine specific gravity and/or proteinuria, and elevated ALP, AST, ALT and cholesterol) are present in up to 75% of SARDS patients.

Despite the common association of systemic abnormalities suggestive of hyperadrenocorticism (HAC), the relationship between SARDS and HAC is currently poorly understood. Only about 20% of SARDS patients are diagnosed with typical HAC, and there are only rare documented reports of dogs with pre-existing HAC developing SARDS.1 Studies have suggested that dogs with SARDS may have atypical HAC due to elevated levels of sex hormones with glucocorticoid-like activity.5 Given the currently poor understanding of the basis of the relationship between SARDS and endocrine disease/systemic abnormalities, it must also be considered that those patients with systemic signs may represent a different disease variant or etiology compared to dogs with no systemic signs.

SARDS is generally considered to be an idiopathic condition, and the underlying etiology is currently poorly understood. Due to similarities with human autoimmune retinopathy (AIR), SARDS is widely proposed to be an immune-mediated condition. However, there’s a lack of consensus (and in some cases, controversy) among veterinary ophthalmologists and researchers regarding this proposed etiology. Several factors have contributed to this lack of consensus, including the inherent difficulty in studying the disease (e.g., lack of available tissues for histologic study during the acute phase of the disease, inability to reproduce the disease in a research setting) as well as a lack of controlled peer-reviewed investigations of the condition. Additionally, study of the disease is likely further compounded by the possible presence of more than one disease etiology or variant (e.g., dogs with versus without systemic signs) being classified under a common diagnosis of SARDS.

Currently, no proven effective treatment options exist for SARDS patients. However, it’s important to be aware of treatments being performed by a small subset of veterinarians, as this information is widely available online and easily accessible to owners of dogs with SARDS. Such treatments typically consist of high doses of glucocorticoids or other immunosuppressive drugs, as well as intravenous immunoglobulin (IVIg). These treatment strategies are derived from current treatment protocols for human autoimmune retinopathy (AIR), a condition that bears many similarities to SARDS. As yet, there is currently no evidence-based data to support that these treatments are actually effective.

Given that a possible immune-mediated pathogenesis is the widest consensus of opinion among veterinary ophthalmologists, a recent clinical trial investigated the potential therapeutic efficacy of mycophenolate mofetil (MMF, 10mg/kg BID for at least 6 weeks of treatment) in dogs with SARDS. MMF had no measurable positive effect on physical health (i.e., systemic signs), vision, or retinal structure in this study.6

Fortunately, the vast majority of blind dogs live a good quality of life with necessary lifestyle adjustments. Dogs with SARDS will often initially go through a period of depression and have significant difficulty navigating in the short term; however, this generally improves within several weeks to months after the onset of blindness. In a study of the long-term outcome of dogs with SARDS, >80% of dogs had moderate to excellent navigational ability in their home environment. Only 10% of affected dogs were euthanized because of SARDS, with >75% of owners feeling that dogs had average to excellent quality of life and >95% saying that they would discourage euthanasia of a dog with SARDS.4

My Tweets
Current status with canine lymphoma: Diagnostics and prognosis

RECOVER CPR guidelines: What you need to know!
Scroll to top