Thoracic radiography is an essential screening tool for pulmonary disease in human and veterinary patients, but has limited diagnostic accuracy. The poor sensitivity and specificity of radiography for interstitial disease and pulmonary nodules is well documented. Radiographic interpretation may also be compromised if pleural effusion is present. Furthermore, the paucity of histopathologic and radiographic correlation poses a diagnostic challenge for many radiologists and clinicians.

In humans, computed tomography (CT) is routinely used to examine pulmonary, tracheobronchial and mediastinal abnormalities, and is the standard screening test for pulmonary metastasis. CT is more sensitive and accurate than radiography for detecting interstitial disease and pulmonary nodules even in the presence of pleural effusion. CT has two primary advantages over radiography: elimination of anatomic superimposition, and superior contrast resolution which delineates aerated lung from soft tissue interfaces.

Multidetector CT (MDCT) scanners are becoming increasingly available in veterinary hospitals and have two main advantages over single-slice helical CT scanners: rapid image acquisition and improved spatial resolution. Larger anatomic sections can be examined per tube rotation, resulting in faster image acquisition. Rapid image acquisition permits conduction of angiographic studies, minimizes respiratory motion artifacts and reduces the duration of general anesthesia. Some cases may be performed under heavy sedation. MDCT data can be reconstructed into submillimeter units with significantly improved spatial resolution and multiplanar image quality. This is particularly advantageous for examination of complex lesions and anatomy. As a screening tool, the primary disadvantage of CT is low specificity because small non-neoplastic and clinically insignificant nodules may be identified. Very small nodules may be difficult to differentiate from peripheral blood vessels, though this is usually not problematic when reviewing CT images in ‘cine’ mode on a computer workstation.

Thoracic CT is most useful when radiographs are equivocal or evaluation is limited by pleural effusion, pneumothorax, or multicompartmental disease. Multiplanar reformatted imaging and contrast administration are essential for examining complex lesions, differentiating pulmonary from mediastinal lesions and examination of tracheobronchial lymph nodes. Computed tomography is frequently recommended to determine the extent of thoracic lesions for surgical and therapeutic planning. CT permits examination of extrathoracic structures, pleura, mediastinum, lymph nodes and vasculature, and may provide information that changes the diagnosis, treatment plan, or prognosis. In a recent study of cats and dogs with indeterminate radiographs, CT findings altered the diagnosis in 48% of subjects.

In veterinary medicine, CT is most commonly utilized to detect pulmonary metastasis, determine the source of spontaneous pneumothorax, surgical planning for recurrent effusions, migrating foreign bodies, lung lobe torsion, and masses of the lung, mediastinum and thoracic wall. This article is a brief review of recent literature and describes CT features of some of the most common conditions. 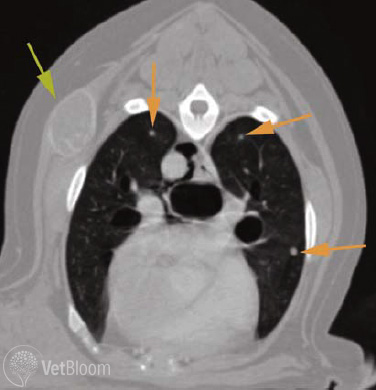 Fig. 1: Axial CT image of the thorax at the level of the carina. Window width and level are optimized for assessing the pulmonary parenchyma. Small metastatic nodules are visible in both caudal lobes (orange arrows). An incidental metastatic lesion is also detected in the right thoracic wall (green arrow). None of these lesions were visible in survey thoracic radiographs.

The lungs are predisposed to metastasis as a result of high perfusion rate and an extensive capillary network that reduces velocity of parenchymal blood flow. Conventional CT can detect metastases as small as 2-3mm (Fig. 1), whereas the threshold for radiographic detection is approximately 7mm. A recent veterinary study with histopathologic correlation found that radiographs failed to detect 90% of nodules identified in CT images, and CT identified metastatic nodules in 39% of patients that had no radiographically detectable nodules. Comparable studies in humans report similar sensitivity and accuracy of thoracic radiography for metastasis detection. Determining the likelihood that a nodule is benign or malignant is a common challenge for the radiologist, especially if a primary tumor site is known. Although the diagnosis cannot be determined without histopathology, some CT features may help improve diagnostic certainty. In a study of people with primary extrathoracic malignancy, single nodules and nodules < 5mm were reported more likely to be benign, whereas multiple nodules and nodules between 5-10mm were more likely to be malignant. Lesions with little change over a prolonged period of time were also more likely to be benign. A nodule’s morphology also determines its conspicuity. Nodules with uniform density and smooth, well-defined margins are typically more conspicuous than those with irregular or poorly defined margins regardless of lesion diameter. Subpleural nodules and those encircled by edema, hemorrhage, or necrosis are less conspicuous because of reduced contrast at the lung-lesion interface.

Bronchoalveolar carcinoma is the most common primary lung tumor in small animals. Most primary tumors are bronchocentric, arising from the center or periphery of cranial or caudal lobar bronchi, and appear as solitary, solid or partially cavitated masses with defined margins. Larger tumors may be associated with bronchial deviation or obstruction. Internal cavitation or necrosis is reportedly more common than dystrophic mineralization. Malignant tumors tend to exhibit heterogeneous contrast enhancement as a result of compromised blood supply and may be associated with perilesional edema that has a “ground glass” appearance on CT. The tracheobronchial lymph nodes (TBLN) drain the lungs and mediastinal structures, and are a frequent site of metastasis from pulmonary neoplasia. In the dog, lymph nodes >12mm in diameter were reported to have high sensitivity and specificity for metastasis. Even when not enlarged, lymph nodes that exhibit peripheral and/or heterogeneous contrast enhancement have also been significantly correlated with metastasis in dogs and humans.

The most common cause of spontaneous pneumothorax is the rupture of pulmonary bullae or blebs. In veterinary literature, a bulla is defined as a large air space within the pulmonary parenchyma, and a bleb is a smaller subpleural collection of air. Early surgical intervention is the treatment of choice to reduce morbidity and recurrence. Radiography is moderately sensitive for detecting pneumothorax but accuracy for detecting bullae is estimated to be <60% in humans and dogs. Radiography underestimates the number of, and poorly localizes, these lesions which may result in an inappropriate surgical approach. In humans, CT has an estimated 90% accuracy rate for determining number, location and dimension of lesions, though it is dependent on the presence and severity of accompanying pneumothorax.

In a recent study of dogs, 77% of surgically confirmed bullae were detected with CT compared to 23% with radiography. Atelectasis is the most common source of false negative findings in both modalities. As pneumothorax worsens, the pulmonary volume decreases and potentially ruptured bulla/blebs are obscured by atelectatic lung tissue. When scanning a patient with pneumothorax, pleural air should be completely evacuated prior to imaging. This may require continuous suction to reduce the degree of atelectasis and allows safe use of positive pressure ventilation.

Lung lobe torsion (LLT) is a serious condition characterized by the axial rotation of a lobe around its pedicle, resulting in airway obstruction and vascular hypertension. With LLT, arterial supply to the lobe is variably maintained but venous and lymphatic efferents are occluded, leading to parenchymal edema, infarction, necrosis and development of pleural effusion. This condition often occurs spontaneously but underlying pulmonary pathology, pleural effusion, thoracic conformation and prior lobectomy are also predisposing factors. The right middle and left cranial lobes are most commonly affected. Clinical signs, hematologic data and pleural fluid cytology are typically non-specific. Radiographic features can also vary with duration of the condition and interpretation may be complicated with the onset of pleural effusion. Because lobectomy is often necessary, a delayed diagnosis can result in patient mortality. CT imaging may be instrumental in obtaining a rapid and definitive diagnosis.

Computed tomography’s primary advantage in the examination of complex pulmonary and airway disease is multiplanar image reformatting. The course of the bronchial tree can be examined using the ‘paddle wheel’ technique which involves pivoting the reformatting plane about the bronchial bifurcation, depicting the airways in different angles. Virtual bronchoscopy is another technique that can be used for non-invasive means of examining the bronchial tree. Virtual bronchoscopy is a high-resolution, 3D CT representation of the internal view of the trachea and bronchi that provides a simulated bronchoscopic exam, plus provides detailed information about peribronchial pathology that cannot be seen with bronchoscopy.

There are some imaging features that are shared by radiography and CT in animals and humans with LLT, including:

The diagnostic CT feature of LLT is a malpositioned bronchus with abruptly tapered lumen proximal to the occluded segment. Vesicular emphysema and tapered, attenuated bronchus are LLT-specific features that are visualized best with CT (Fig. 2).

Other features that may be seen with LLT include mediastinal shift, rotation of the carina, and pneumomediastinum or pneumothorax if the bronchial wall is compromised. In virtual bronchoscopy, a torsed bronchus has a flattened lumen with a “fish mouth” appearance, whereas normal bronchi have a round lumen. By comparison, an infiltrative or compressive peribronchial mass can mimic the appearance of LLT. However, extraluminal lesions typically do not compromise arterial blood supply and exhibit some degree of contrast enhancement whereas torsed lung lobes exhibit poor contrast enhancement as a result of arterial thrombosis and/or parenchymal necrosis.

Indications for thoracic CT are similar for small animals as in humans, and will play an increasingly important role in evaluation of thoracic disease as multidetector CT becomes more widely available. The decision for CT examination may be multifactorial and is often dependent on a cost-benefit analysis as to information that would be potentially gained.