A 63 lb, 2 year-old spayed female German Shepherd dog was referred for evaluation of gagging and labored breathing of two weeks duration. The owner complained that she panted constantly and had developed a hacking cough that sometimes induced vomiting. She had been treated with Zeniquin for 10 days without improvement.

On physical exam, she was noted to be thin (BCS 3/9) bright and alert with body temperature of 102.6oF. She was panting with increased inspiratory effort but no abnormalities were detected upon pulmonary auscultation. The results of serum biochemistry were within reference range. Abnormalities detected in the CBC included monocytosis (2.2%) and eosinophilia (11.8%). Arterial oxygen levels were measured at 64mm Hg. Radiographs of the thorax were obtained (Fig. 1; only right lateral shown). 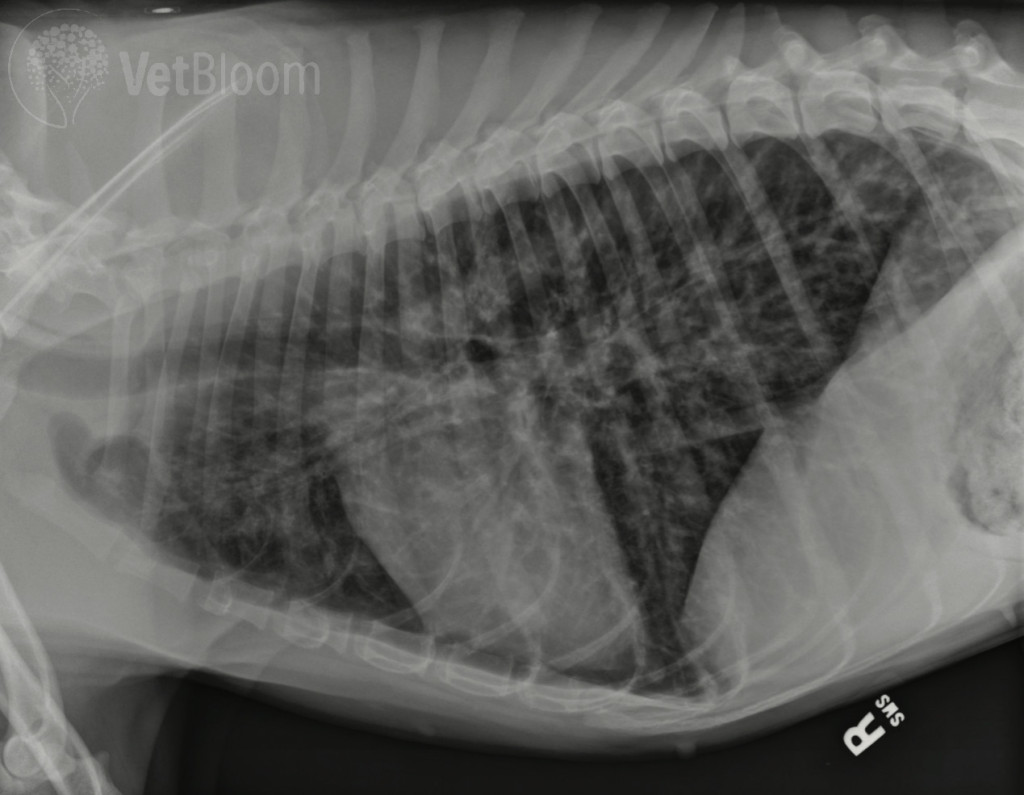 There is a severe, generalized bronchial pattern with moderate peribronchial infiltrates (cuffing) in all lobes and moderate pulmonary hyperinflation, indicated by the slightly flattened and caudally displaced diaphragm crura and extension of the caudal lobes beyond T13. Mild to moderate microcardia is also evident. There is no pleural effusion or mediastinal lymphadenomegaly. The radiographic diagnosis is severe inflammatory lower airway disease with functional air trapping. Differentials for this pulmonary pattern include acute allergic bronchitis, parasite-induced pneumonitis, eosinophilic bronchopneumopathy, or acute bronchitis with early bronchopneumonia. Diffuse neoplasia is considered unlikely due to the patient’s age. Differentials for microcardia include hypovolemia, dehydration, shock, or poor body condition. In this case, microcardia was attributed to her poor body condition.

The patient was admitted for supportive care. Supplemental oxygen was administered through a nasal cannula and arterial oxygen levels rose to 86 mm Hg. A transtracheal wash was performed and cytologic evaluation of the fluid revealed an eosinophilic inflammation (47%, eosinophils, 13% non-degenerate neutrophils, 3% macrophages, 3% mature lymphocytes, and 34% normal respiratory epithelial cells) which confirmed the diagnosis of eosinophilic bronchopneumopathy. No etiologic agents were identified and bacterial cultures yielded no growth. Results of Snap 4Dx test were negative. Baermann fecal analysis was also negative. Initial treatment consisted of antibiotics, anti-inflammatory dose of prednisone, theophylline and fenbendazole. The patient’s condition steadily improved during hospitalization although an increase in prednisone dosage was required to reduce respiratory effort. The patient was discharged with a treatment regimen that included continued antibiotic therapy, theophylline, and a tapering dose of prednisone. Two weeks later, the owner reported the coughing and panting had improved, but respiratory effort was still increased during exercise. Arterial oxygenation was measured at 105 mm Hg. Radiographs were repeated (Fig. 2) which revealed a dramatic reduction of peribronchial infiltrates though mild peribronchial cuffing persisted in the caudal lobes. Two months after the initial diagnosis and one month following discontinuation of prednisone, the patient was reported to be doing very well on theophylline monotherapy. She had increased energy level, improved body condition (BCS 6/9) and complete resolution of coughing and panting. Radiographs at that time demonstrated complete resolution of peribronchial infiltrates with a mild persistent bronchial pattern (Fig. 3).

Eosinophilic bronchopneumopathy (EBP) is an inflammatory disease characterized by eosinophilic infiltration of the bronchial mucosa and pulmonary interstitium. Formerly known as pulmonary infiltrates with eosinophilia (PIE), the etiololgy of EBP is unknown but is considered to be a manifestation of immunologic hypersensitivity. Proposed causes include inhaled allergens (mold, pollen, fungi, dust), infectious agents, or occult heartworm disease but the inciting agent is often not identified. EBP is typically diagnosed in young adult dogs (4-6 yr) but it can occur at any age. Females and dogs of Siberian Husky or Alaskan Malamute breeding are reportedly predisposed. EBP is characterized by a chronic cough that is typically harsh and persistent and may progress to respiratory distress. The cough is frequently followed by gagging or retching and may be confused with gastrointestinal disease. Exercise intolerance and dyspnea are common. Pulmonary auscultation may be normal but increased lung sounds such as crackles and wheezes are often detected. Nasal discharge may be present in half of affected patients. The diagnosis of EBP relies on radiographic features, bronchoscopic examination, cytologic demonstration of eosinophilic inflammation within respiratory tract specimens, and exclusion of infectious agents. A diffuse bronchointerstitial pattern is the most common radiographic feature in dogs with EBP. The pattern is generally more severe than in dogs with chronic bronchitis and peribronchial infiltration (cuffing) and bronchiectasis are common. Yellow- green mucoid secretions, thickened bronchial mucosa with an irregular to polypoid surface, and concentric airway occlusion during exhalation are typical bronchoscopic features of EBP. Leukocytosis with neutrophilia is reported in a majority of patients with EBP. Peripheral eosinophilia is detected in approximately half of affected patients. However, an absence of eosinophilia does not exclude the diagnosis. This condition is highly responsive to corticosteroids but relapse is frequent when tapering or discontinuing therapy. Improvement can be seen within days, but complete resolution may require several months of therapy.

Lids, the Prequel
Scroll to top