Gastroprotectant and antacid therapies are commonly employed in veterinary medicine when we wish to prevent gastric ulceration or suspect gastric ulceration may be the cause of clinical signs in our canine and feline patients. True gastric ulceration is defined as damage of the gastric mucosa to the level of the lamina muscularis or deeper. More superficial mucosal damage is defined as erosion. Both erosions and ulcerations occur when the gastric protective mechanisms such as prostaglandins, mucus, epithelial turnover and mucosal blood supply are exceeded by damaging mechanisms such as acid, pepsin or trauma.

The entire gastric epithelial surface is replaced every 2-3 days, with cellular production occurring in the crypts and migrating toward the lumen to be shed. A rich microcirculation is necessary to transport nutrients, oxygen and back-diffused hydrogen ions. The mucus layer protects the mucosa from digestive enzymes, acts as a mechanical barrier against abrasion and consists of viscous glycoprotein that is produced by gastric neck cells. Bicarbonate secreted into the mucus layer establishes a pH gradient and neutralizes stomach acid. Prostaglandins (from arachidonic acid and enzyme cyclooxygenase (COX)) may increase cell turnover, decrease gastric acid secretion, increase bicarbonate and mucus secretion and cause vasodilation increasing blood flow to the gastric mucosa. Medications that interfere with prostaglandin production such as non-steroidal antiinflammatory drugs (NSAIDs) contribute to ulcer formation by interfering with all of these protective mechanisms.

While corticosteroids do decrease protective eicosanoid production, and are often implicated in the formation of gastric ulcers, they only contribute to ulceration when other factors are present (NSAID therapy, hypotension) or they are administered at very high doses (4-6 mg/kg/day). Other documented causes of gastric ulcer formation include infiltrative diseases such as neoplasia, pythiosis and inflammatory bowel disease. Metabolic diseases such as renal failure and hepatopathy will cause gastric ulcers secondary to reduced renal gastrin clearance and elevated histamine levels, respectively. Pancreatitis, hypoadrenocorticism, disseminated intravascular coagulation and mechanical irritants like chemical toxins and foreign objects (if pre-existing gastritis or ulcers are present) are causes of gastric ulcers. Conditions that increase gastric acid such as a gastrinoma in the pancreas, mast cell tumors and amine precursor uptake and decarboxylation tumors (APUDomas) will contribute to ulcer formation. Since the gastrointestinal tract is the shock organ in our canine patients, hypovolemia, sepsis and systemic inflammatory response syndrome (SIRS) may be commonly overlooked causes of gastroduodenal ulceration. Any critically ill patient should be considered at risk for ulcer formation.

Clinical signs of gastric ulceration can range from mild biochemical changes to severe vomiting. Dogs do not secrete gastric acid continuously like people do, and blood from an ulcer may not always appear digested when vomited. Vomiting, inappetence and anorexia may be the most common clinical symptoms of ulceration.

Biochemical changes may include regenerative or nonregenerative anemia with, or without hypochromasia and microcytosis, and electrolyte abnormalities from severe vomiting. Melena may not be present if the blood loss is minimal, and fecal occult blood testing may be falsely positive from red meat, cauliflower or turnips (peroxidase-rich foods) in the diet. A 3-day hiatus from red meat is recommended before fecal occult blood testing is performed using any method.

Fig. 1: Gastric ulcers in a 5 1/2 year old male, castrated Goldendoodle. He presented for vomiting and diarrhea.

Definitive diagnosis of gastric ulceration is best made with gastroscopy (Fig. 1). Therapy, however, may be implemented based on history (NSAID administration), risk (disease process) and clinical signs. Therapeutic goals include amelioration of clinical signs, reduction of complications and prevention of recurrence. Discontinuation of ulcerogenic medications, re-perfusion by establishing adequate volume and hydration, antacid therapy and reduction of gastric acid secretion are the mainstays of therapy. 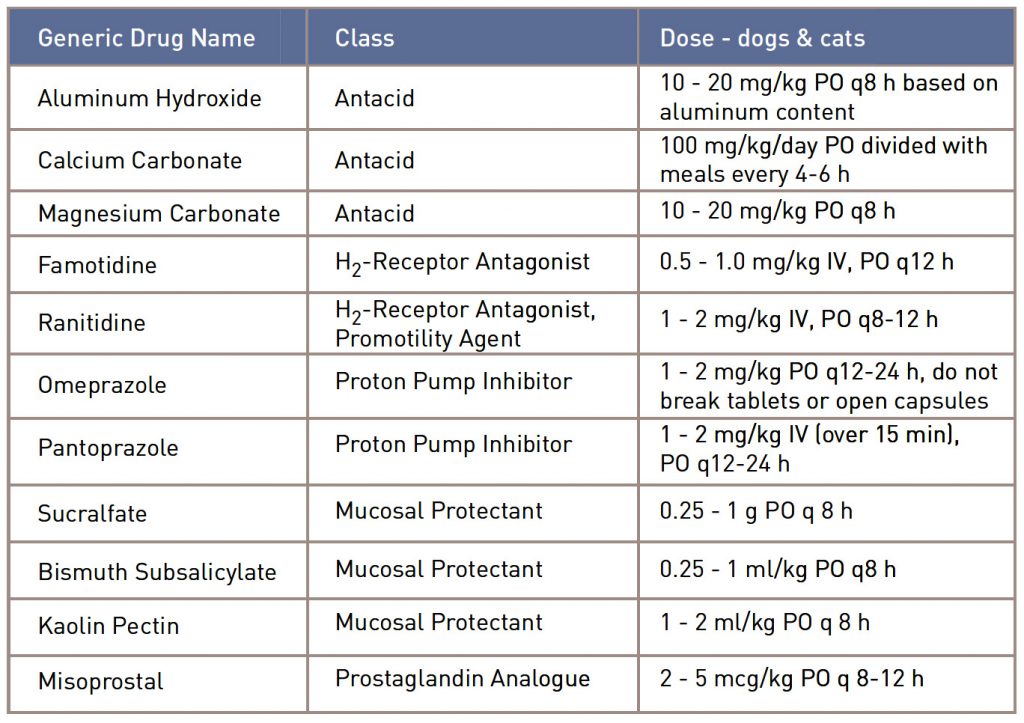 Gastric acid may be reduced medically by histamine2- receptor antagonists (H2-RA) or proton pump inhibitors (PPIs). Acid production by parietal cells of the gastric glands is diminished when the H2 histamine receptors are blocked. Additionally, H2-RAs have been demonstrated to increase mucosal blood flow, bicarbonate and mucus. A study in 2005 revealed that of all the H2-RAs used in veterinary medicine, famotidine was the only one to affect gastric acid secretion. Cimetidine and ranitidine were found to be no more effective than saline at pH reduction. An abstract recently presented at the 2010 ACVIM forum found that famotidine, even at doses of 1-1.5 mg/kg every 12 hours, was not significantly different than placebo in decreasing gastric acid when compared to omeprazole, a PPI. Both ranitidine and nizatidine have been shown to have some additional gastric promotility activity. Cimetidine must be used with extreme caution as it decreases hepatic blood flow and inhibits hepatic P-450 and P-488 enzymes. This, in turn, allows medications cleared by this pathway (cyclosporine) to accumulate in the body, reaching higher plasma concentrations. The use of cimetidine for acetaminophen toxicity in cats and dogs is also controversial as it has not been proven to be effective: recent research suggests that it inhibits beneficial hepatic biotransformation pathways. It is no longer used in human medicine for acetaminophen toxicity.

Proton pump inhibitors exert their effect by blocking the H+/K+-ATPase enzyme on the gastric luminal side of the parietal cell. Acid secretion is inhibited regardless of the cause of gastric acid production (histamine, acetylcholine or gastrin). In humans, omeprazole has been shown to be more effective and consistent in acid suppression than famotidine. Current research finds this to be true in dogs as well, though higher than traditional doses may be needed for adequate suppression. Optimal gastroduodenal ulcer healing occurs at an intragastric pH of > 3 in humans. PPIs started 1-2 days prior to surgery have been shown to decrease intraoperative gastroesophageal reflux, which may minimize postprocedural complications including esophagitis and aspiration. Newer PPIs such as pantoprazole (available in an injectable form for more rapid gastric acid suppression), esomeprazole and lantoprazole are being examined for efficacy in veterinary medicine.

The mucosal protectant, sucralfate, is a sulfate dissaccharide with aluminum hydroxide groups. When ingested it dissociates to aluminum hydroxide (which buffers H+) and sucrose octasulfate, which combines with hydrochloric acid to become a paste-like substance that adheres to damaged mucosa. The necessity of hydrochloric acid activation in the stomach explains the minimal effect sucralfate has on oral or esophageal ulceration when regurgitation or vomiting is controlled. The adhered substance minimizes further mucosal damage by bile, acid and/or pepsin. Administration of H2-RA and PPIs do not impact the efficacy of sucralfate as it continues to work at a near neutral pH. A two hour separation from other drug administration is recommended as sucralfate can greatly affect gastric drug absorption. Like sucralfate other mucosal protectants such as bismuth subsalicylate, kaolin-pectin and products containing barium may bind bacteria and their toxins, while simultaneously coating the intestinal tract.

Misoprostol, a synthetic prostaglandin E1 (PGE1) acts similarly to endogenous prostaglandins to increase cell turnover, decrease gastric acid secretion, increase bicarbonate and mucus secretion and vasodilate the vessels increasing blood flow to the gastric mucosa. In order to have an effect, misoprostol must be absorbed into the systemic circulation. While demonstrated to potentially be protective against damage by NSAIDs, misoprostol’s effect on corticosteroid induced injury is debated and it has been shown to not be useful if an ulcer is already present. When owners administer this medications gloves need to be worn, as it is easily absorbed through the skin and may induce abortion in pregnant women.

The future of gastric acid suppression in veterinary medicine may include gastrin receptor antagonists, gastrin-releasing peptide receptor antagonists and potassium-competitive acid blockers that block the H+/K+-ATPase by competing with potassium. For now, the use of PPIs appears to be the most effective and consistent form of gastric acid inhibition in both dogs and cats.

My Tweets
Diagnosis and treatment of keratoconjunctivitis sicca