History: Patient has severe dental disease and was presented for dental cleaning and extractions. Adopted from shelter 2 years prior. 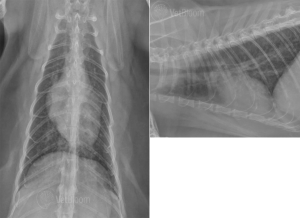 There is a moderate diffuse increase in pulmonary parenchymal opacity, with ill defined vascular margins and a micronodular component in the caudal lung lobes. There is mild to moderate diffuse bronchial wall thickening. The cardiac silhouette is at the upper limits of normal for size. Findings consistent with a diffuse bronchointerstitial pattern, with miliary component – secondary to chronic lower airway disease of allergic, inflammatory, or parasitic origin.

The radiographic findings in this case are typical in those seen in feline patients with chronic lower airway disease of allergic etiology. A tracheal wash was performed that revealed severe eosinophilic histiocytic inflammation. Fecal analysis done by Baermann examination revealed Aelurostrongylus abstrusus larva. Aelurostrongylus abstrusus is a nematode that primarily infests cats. This lungworm is found worldwide, and infestations are more prevalent in outdoor or feral cats. Most cats with Aelurostrongylus infestations are asymptomatic, though severe cases may develop cough, dyspnea, debilitation, or death. The severity of clinical signs has been suggested to be directly related to the larva burden. The adult nematodes reside in the terminal bronchioles and alveoli causing pneumonitis, bronchiolitis, interstitial and alveolar pneumonia, and muscular thickening of the pulmonary arteries. The adult nematode produces eggs within the lung which are then coughed up and swallowed, and passed in the feces. A snail or a slug serves as an intermediate host. Cats may become infected by eating the snail or slug, or by eating a storage host that has fed on the snails (such as a rodent or bird). Larva remain infective in the environment for up to 1 month and up to 2 years within an intermediate host. Most infestations with Aelurostrongylus abstrusus are mild and self-limiting. Current treatment recommendations for cats with severe pulmonary disease include fenbendazole (Panacur) or ivermectin.

My Tweets
Gastroprotectant and antacid therapy in veterinary medicine

Canine hypoadrenocorticism: An overview of what we know and have learned
Scroll to top