In normal tissues there is a balance between cell birth and cell death.  Disruptions in the factors that control this homeostasis can lead to uncontrolled cell growth or lack of cell death, thus producing a malignancy or tumor.  Tumor cells show abnormal growth patterns and are not controlled by normal homeostatic growth controlling mechanisms.

Tumors are usually quite advanced before detection.  A one centimeter tumor has about a billion cells.  Unfortunately, tumors that are big enough to be detected tend to be less responsive to chemotherapy.  Growth rates of tumors vary, and growth rate is important in determining chemotherapy response.  The more actively dividing cells are more sensitive to chemotherapy.  As a tumor gets larger, its growth tends to slow which is likely the result of increased cell death and decreased proliferation as tumor nutrition declines.  Tumor cells outgrow their blood supply which results in a microenvironment with reduced oxygen and nutrients.  Tumors are also characterized as having “genetic instability,” and multiple chemoresistant clones in a tumor increase with tumor volume as well (Goldie et al.).

Chemotherapy can be used to treat visible tumors and also in the adjuvant setting.  The adjuvant setting refers to treatment after the primary treatment i.e. surgery or radiation therapy.  The goal of adjuvant treatment is to target micrometastasis in tumors that have a high risk of metastasis and also to prevent recurrence of the tumor locally in certain situations.  Against measurable tumors, chemotherapy can be used in the neoadjuvant setting or in the palliative setting.  The goal of neoadjuvant therapy is to downstage or cytodeduce a tumor before a primary treatment (i.e. surgery or radiation) to improve outcome.  The goals of palliative chemotherapy are to improve clinical signs related to the primary tumor or metastasis.  Chemotherapy used as such in the bulky or measurable disease setting is going to work most effectively for quickly growing tumors. Smaller tumors may respond better due to a higher growth fraction.

Hemangiosarcoma is a highly aggressive and metastatic tumor that is derived from endothelial cells.  Splenic hemangiosarcoma is the most common anatomic form, but hemangiosarcoma can develop in other organs including the skin/subcutis, liver, and heart.  Chemotherapy can be used in the neoadjuvant, palliative, and adjuvant settings.

Neoadjuvant chemotherapy can be considered for large subcutaneous and intramuscular tumors.  In 18 dogs that were evaluated in the neoadjuvant setting, the response rate was 38.8-44% (partial and complete responses, with 1 dog having a complete response).  Four dogs were able to go on and have complete surgical excision after chemotherapy (Wiley et al.).  The time to tumor progression was 207 days when chemotherapy and surgery were used, and 83 days with chemotherapy only.  Adequate local control (ALC) is defined as complete tumor resection or incomplete tumor resection followed by radiation.  Achieving ALC has been found to provide the best chance of longer term control in subcutaneous/intramuscular tumors.  Shiu et al. found that time to tumor progression was 202 days with ALC versus 72 days with no ALC, similar to Wiley et al.’s findings using neoadjuvant chemotherapy and surgery.

Palliative chemotherapy can be considered with subcutaneous and intramuscular tumors, atrial tumors, and tumors in which metastasis has occurred. 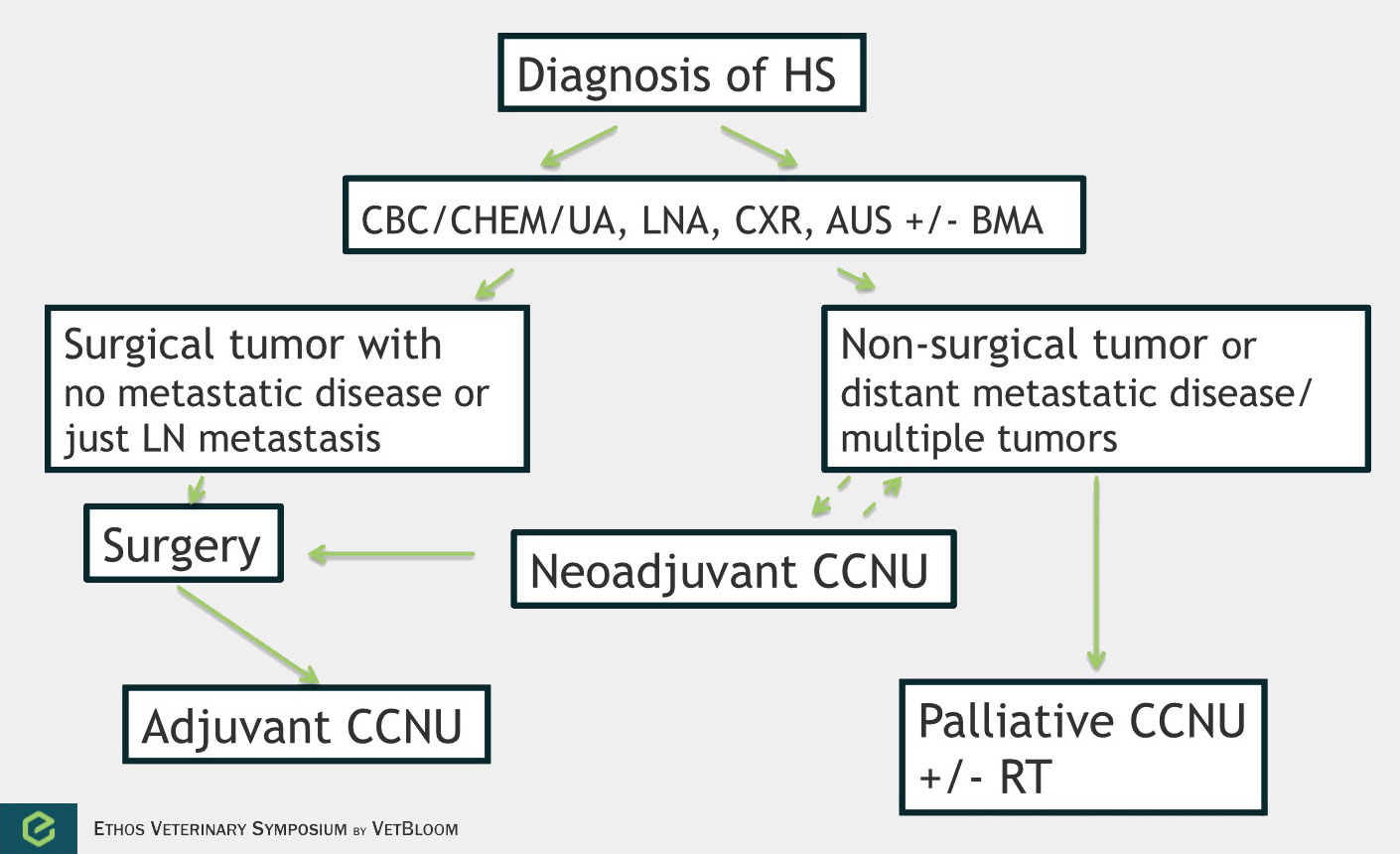 Histiocytic sarcoma is an aggressive and highly metastatic (70-90%)cancer of histiocytic cells. This disease has been reported toaffect the lungs, lymph nodes, liver, spleen, stomach, pancreas, mediastinum, skin,skeletal muscle, central nervous system, bone, bone arrow, nasal cavity, and eyes.There is both a localized form of histiocytic sarcoma and a disseminated form. Chemotherapy is most commonly used in the adjuvant or palliative setting, but neoadjuvant chemotherapy could be considered in large non-disseminated tumors.

In a prospective study of 14 dogs, the overall response rate was 29% with a median response of 96 days(Rassnick et al.). 3 dogs had a complete response (54-269 days), and 3 dogs had a partial response (78-112 days).A response rate of 46% was noted in a retrospective study of 59 dogs (Skorupskiet al.). The overall survival time was 106 days, and dogs with ALC of the tumor lived 433 days or longer (n=3). Skorupski et al. then looked at using CCNU as an adjuvant treatment. In 16 dogs with ALC, the median survival time for all dogs was 568 days.Flow chart for approach of canine histiocytic sarcoma: 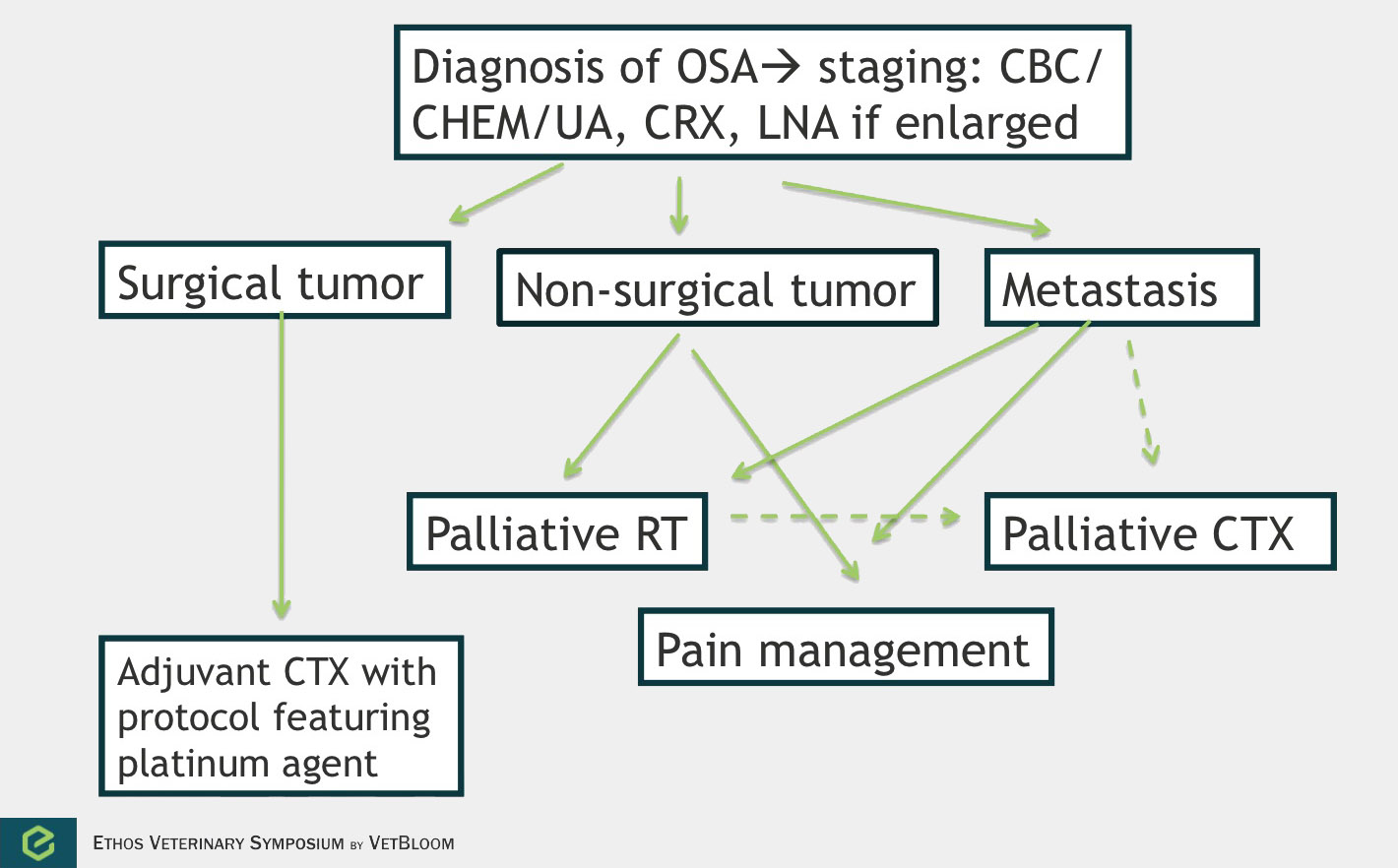 Osteosarcoma is the most common primary bone tumor in dogs.  It is a locally aggressive tumor with a high metastatic rate.  The main use of chemotherapy is in the adjuvant setting.  However, chemotherapy can also be used in the palliative setting.  No data exists that shows improved survival in dogs given chemotherapy prior to surgery.  90% of dogs will die because of metastatic disease within 1 year when treated with surgery alone (Spodnick et al.).  The use of adjuvant platinum chemotherapy has significantly improved survival times with 1 year survivals of 35-62% and median survival times of 235-413 days.  Most dogs will still die because of their metastatic disease.

Cisplatin, carboplatin, and doxorubicin have been found to have efficacy in osteosarcoma in the adjuvant setting.  Cisplatin is not commonly used however because it requires up to 6 hours of diuresis due to nephrotoxicity.  Carboplatin has similar anti-tumor effects and is less nephrotoxic.  Two studies examining doxorubicin as a single agent in the adjuvant setting for osteosarcoma showed very different outcomes.  Berg et al. showed an outcome very similar to what is seen with platinum agents (1 year survival of 50%), and Madwell et al. showed a median survival of only 104 days.  Combination protocols of alternating platinum drugs and doxorubicin have been examined with comparable results to single agent protocols.  Chemotherapy can be considered in the adjuvant setting with non-appendicular tumors, especially if higher grade, but local disease control is usually more of an issue for these patients.

Palliative chemotherapy can be considered for metastatic disease or for the primary tumor that has not been treated with surgery.  In a study that examined various injectable chemotherapy drugs to treat metastatic osteosarcoma (Ogilvie et al.), a response was seen in only 1 of 45 dogs (a partial response lasting 21 days).  While response to injectable therapy has been disappointing in treating metastatic disease, a study evaluating the biological activity of Palladia in solid tumors demonstrated close to 50% clinical activity in 23 dogs with metastatic osteosarcoma (10 dogs with stable disease and 1 with a partial response) (London et al.).  Treating a primary bone tumor with chemotherapy will not do much for pain control when given alone, but may be beneficial when given concurrently with radiation (Ramirez et al.). 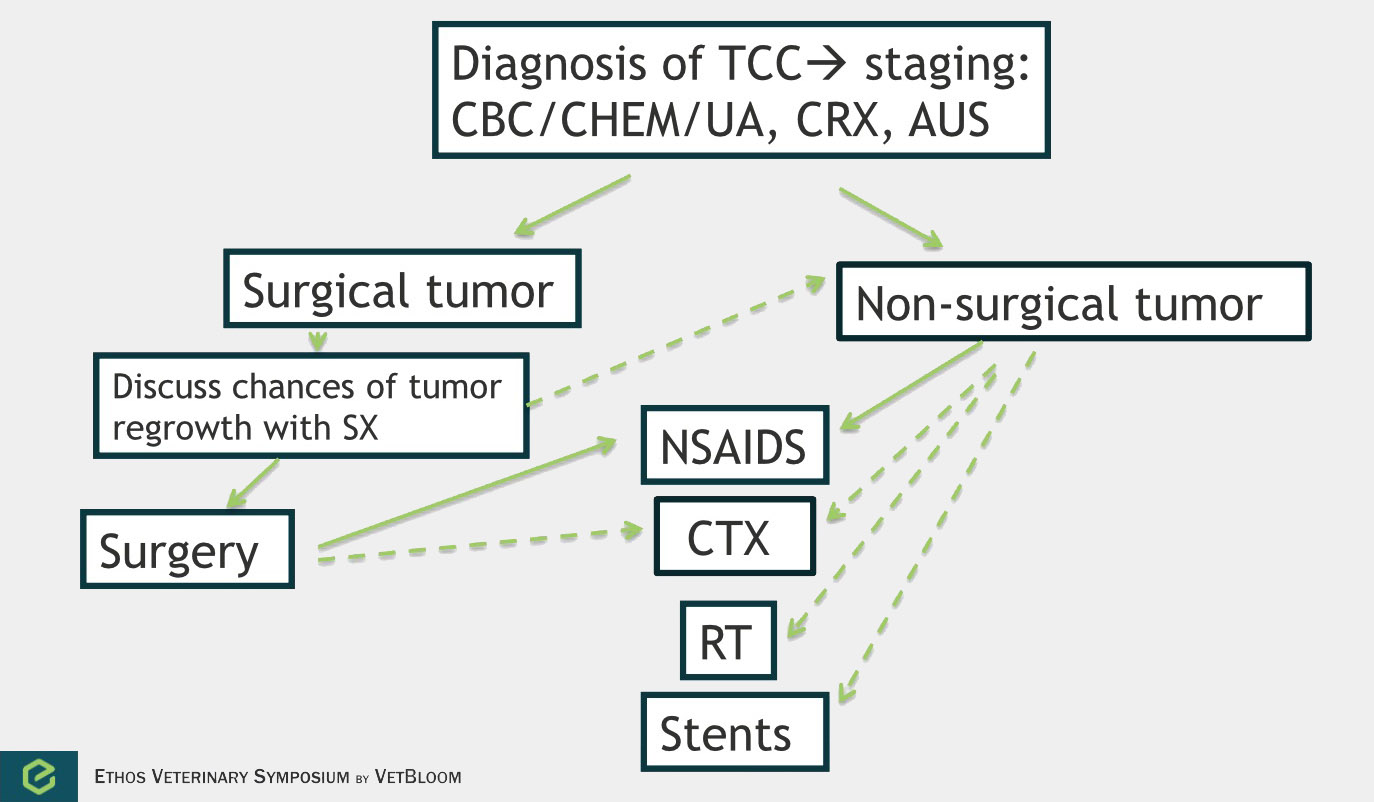 Transitional cell carcinoma is the most common form of canine urinary bladder cancer.  Transitional cell carcinoma can affect the bladder, urethra, and prostate.  It is a locally invasive tumor with moderate metastatic potential (16% have lymph node metastasis at diagnosis, 14% have distant metastasis at diagnosis, and 50% have metastasis at death) (Knapp et al).  Chemotherapy is most commonly used palliatively, but should also be considered in the adjuvant setting.  Studies evaluating treatment of transitional cell sarcoma by response and median survival time are difficult to evaluate.  Response is often measured by ultrasound, and cystosongraphic measurements of canine bladder tumors have been found to vary significantly with operator and bladder tumor volume.  Survival on the other hand is very much dependent on when and owner decides to euthanize.

Non-steroidal anti-inflammatory drugs (NSAIDs) are recommended in all dogs with transitional cell carcinoma due to their anti-cancer activity and improvement of clinical signs.  Intravenous/oral chemotherapy drugs that have shown responses include mitoxantrone, carboplatin, cisplatin, vinblastine, chlorambucil, and gemcitabine.  These drugs are often given along with an NSAID to improve outcome.  Use of these chemotherapy agents adjuvantly requires further study.  There is a high rate of tumor regrowth following surgery, and chemotherapy may be more effective when treating minimal residual disease.

My Tweets
I’ve got your back: Diagnosis and management of IVDD

Take a deep breath: The technician’s role in respiratory emergencies
Scroll to top